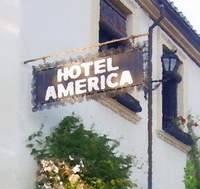 I meet Candelaria at a café on the slopes of the Albaicin – the old Moorish quarter – and sip peppermint tea from petite porcelain cups. She orders almond cookies and apologises for her Spanish. The courtyard is open, with large paved flagstones, the tables squarish, small and scattered. Surrounding high walls on three sides are alive with masses of espaliered red roses.

We sit soaking up the last of the sun, gazing eastward over receding terra cotta rooves as they disappear from view down to the winding river realm of the Darro. Across the river lay slopes cloaked in the green of lush gardens, up to the rising knoll and already russet-tinged walls of the Alhambra citadel; once home to 13th and 14th century Moorish rulers.

Candelaria, a mosaic artist, suggested this café to watch the sun set over the Alhambra. She has shining eyes to match her name, dark olive skin a startling contrast to the white of a simple linen blouse; a bright embroidered mantoncillo casually draped over her shoulders. We’re chatting of Washington Irving’s `Tales of the Alhambra’; Irving an American writer `spellbound in the old enchanted pile’ of a dilapidated Alhambra when living there in 1829. Her eyes widen as she flicks the pages. “Ah, yes; a wonderful read. My son knows all these stories.” She gently rests my book on the table and looks up. Like Irving, Candelaria is captivated by Andalusia, its exotic mix of the Moorish and Gothic. But she tells me, it’s this place – the Albaicin – where the magic truly lay. “And to be finally actually living here is a dream come true…like coming home in some strange way.” Candelaria looks wistful, eyes half-closed in thought. 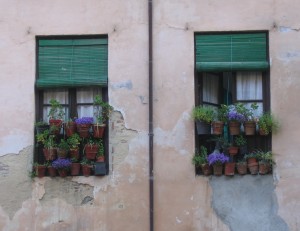 At the bottom I follow the Carrera del Darro, passing crooked walls along a winding river, by narrow stone bridge arches bathed in the golden glow of street lamps. Then it’s up a another cobbled path – the Cuesta del Rey Chico – for a further 15min to my Parador room.

In the dark I imagine this citadel in Irving’s day: walls on the verge of collapse, columns in disrepair, rooves leaking, a crumbling tower home to tenants living with bats and owls; washing hanging from every opening. One ragged creature claims royal heritage; another is a small fairy of a thing, living beneath a stair. She’s outlived five husbands, is a master of needlework, sings and tells odd stories; where she’s from no-one knows. There’s a man with a bottle nose and a cocked oilskin hat; Irving living among a family with lineage traced back to the 15th century; their poverty handed from father to son. Irving himself was born in New York, 1783. It’s very late, and at the open window I inhale the sweetness of orange blossom. The falling waters of a fountain sparkle, the splashes soft and enamouring, the edges of hallways and marble columns lit with moonshine. I read of Irving, him lulled to sleep by the distant serenade of an ancient guitar, the echoes of castanets and the swish of some Spanish dancer’s dress.

In the morning, the summer light shines on citadel walls and marble columns – royal surrounds now anything but dilapidated – Irving’s squatter companions long gone. Grand stalactite cupolas vie with ornamental works in stucco, ceramic tiles brightly coloured, precious wood skilfully sculptured, Alhambran palaces, guard room, patios, exotic fountains and gardens. To the east lays the rural residence; the most resplendent gardens and water features dominant over summer houses and pavilions. For here it’s the giant boxwoods that set the mood; along with carnations, roses, willow and cypress. The Court of Lions has the stillest water in wide basins, gently falling, eventually gliding through narrow canals, and exploding into jets and cascade falls.

From there I amble 100m to a quaint three-storey building, the Hotel America; cream stucco, bougainvillea-draped wrought-iron balconies and window boxes. Built at the beginning of the 14th century, the courtyard, southern aspect and garden are classic urban Spain. I breathe balmy summer air seated among blue-tiled tables. Candelaria is late and my mind wanders. There, in a leafy corner across the way: can I see the 36yr old Irving? A handsome man by all accounts; tall, in the elegant Western attire of the times, dark curling hair, aquiline nose, and white ruffled shirt under a dark jacket. He’s holding court drinking Barbadillo and picking at a bowl of green olives.

With Candelaria’s arrival we talk again of Irving, and she smiles when I change the subject. Yes, she is Australian – from my home city as it happens – her family emigrating in the early ‘60s, working hard in her uncle’s Melbourne restaurant. I’m incredulous at her not having spoken Spanish at home, and she shakes her head. “Sadly no. I’m so sorry now, that I paid so little attention to the language. But I was young, and I was Australian. I listened of course, and spoke a little. Away from the restaurant I was embarrassed. At school I would never speak Andaluz. All the kids knew me as `Candy’, my twin sister `Mary’.” Candelaria shrugs. “In my 20s I did try to learn, but my husband saw no point; and suddenly I’m a mother!”

I offer sangria from my carafe, but she refuses then smiles.  “I must pick up Mama and my baby from the airport. He’s eight now.” I ask about Candelaria’s parents and she hesitates. “Ah, my father, he hates me being here.” She stares down on the tiled table. “He tells me he sees his dead father every single day, and Franco’s brutal murder of Lorca.” Candelaria raises her ample eyebrows, and I take her point; I know the great Andalusian poet. She nods and continues. “Well, my father idolises Lorca. I remember when I said goodbye; he told me that in Spain, the dead are more alive than anywhere in the world – that’s Lorca. Father tells me he can never forget.” Candelaria’s eyes well up with tears. “Mama cried when I applied for the visas.” Candelaria pulls out a handkerchief and blows her nose. “She has been so kind, and will cry much more when she says goodbye.” Candelaria hesitates for a moment. “My father, he does not understand; says I’m being selfish to take his only grandson. Siss agrees.” Candelaria takes a deep breath. “I just need to spread my wings.”

I think I understand, and recall Irving’s regrets when called back to New York’s ‘bustle and business’, while wondering how he would ever ‘…endure its commonplace, after the poetry of the Alhambra?’