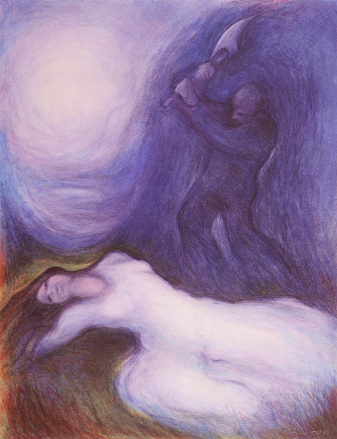 Cars and trucks wait in orderly line, the ferry still one hour distant.  It’s the northern autumn, the air ominous and dank, rain arriving as I leave my car.

The church I pass is small, the wet bluestone black. Behind, a large mound rising to leaden skies, its sides shrouded in forest and sheets of rain. Not far now. My face and hands turn cold.

I am told she tread this very path, with no written record – a young woman from Tennes –  religious hymns on her lips, tall and straight, white wedding dress, long brown hair tumbling on strong shoulders. I imagine the Arctic air heavy as now, the village folk hushed, eyes wide and waiting, until startled from the spell, they shuffle aside to let her pass. Heads turn, staring, in denial of what they’ve heard.

At the trial a judgement was easily made, a punishment to match her crime. There had been celebrations and drinking long into the night, her fiancée known as brutal and violent. In a fit of despair, she struck out and killed the man.

Arrested and jailed – her life a flash before her eyes – slumped head in hands, miserable and wretched, face wet and smeared. Mother wept with daughter, shook her head in disbelief. “But this man of yours, he is surely a bad man, so cold and so cruel.” All to no avail; her daughter distraught with some secret guilt. “But mama, you must listen.  I am ashamed of what I have done.”

A mother always listens; their faces touched, the words unwanted, her white knuckles gripped the daughter’s sleeve before desperately pulling away. Could it be her own daughter murdered a baby child? But no, the confession was worse; five little ones born in secret – all illegitimate – each killed in turn.

My muddy path is slippery, the rain a soft patter on my jacket hood. My eyes wander back to the fishing village. The trees sway in a soulful breeze as the car ferry sounds its harbour arrival. From atop the mound I see the black hull and raised bow. I turn to the church spire, then down at the memorial at my feet, the blade of an executioner’s axe embedded in stone, the grass green.

I am among a faceless crowd, mesmerised by the thought of a breathtakingly beautiful woman of forty-four years, convicted of the most heinous of crimes on the testimony of a heartbroken mother.

She calmly kneels, her neck across a wooden block, the gnawing of her conscience finally at rest, long hair brushed aside, hands clasped in prayer. The hooded and leather-clad executioner towers above, arms raised, axe paused mid-air. 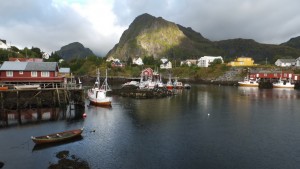