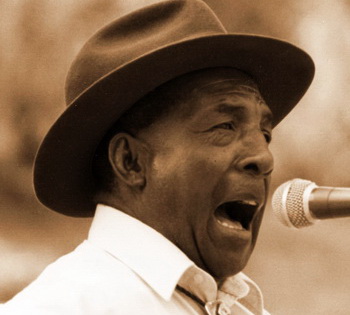 Upright sleeves of vinyl records – Mayall, Joplin and Bloomfield – sit above a dishevelled shelf of seventy assorted blues CDs, and these days an under-used turntable. I read the CD titles from left to right, tucking in a Broonzy and dusting off a Burnside.

I grab another, wrong way round, lifting it clear and prying it open until the printed jacket floats to the floor – the cover’s plastic nib broken – the artwork landing with track titles and credits up, along with the scrawl of Dom Turner’s initials in thick black text. Dom is the iconic blues guitarist of Australian group the Backsliders. I kneel and turn to the lyrics of track five, `Black Top Road‘. The Southern ratchet drawl is that of John Jackson, a Piedmont bluesman. I recall a time when I’d not heard that name.

I take another look, picking up where I left off, my eyes straying further along the shelf. There’s Carr, Clapton, Collard and Collins; there’s Guy through to Hooker, House, Hurt, two James and two Johnsons.

Music is my time machine, often taking me to other places; in this case a small Victorian fishing village on the Great Ocean Road to the west of Melbourne – part hippie, part farming – a curtain of mist hanging from a hazy Otway Ranges backdrop. A fresh salt breeze floats up from the bay.

The year is 2003. Inside the beachside pavilion lights are muted; the Backsliders bathed in a blue glow. The sampled words are pure gravel, worn and weary; the crackle of early vinyl from a small box speaker, vibrations on a wooden stage. Jackson’s phrases are repeated as an abrupt riff is wrenched from a single guitar – Dom Turner’s ‘Gerard Gilet’ twelve-string – the ring insistent and loud; ex-Midnight Oil, Rob Hirst’s drums thump and pound. The harp howls. The band’s been around for almost twenty years, but it strikes me the pre-recorded voice is from another world.

Jackson was born in 1924 in the Blue Ridge Mountains of Virginia, one of fourteen siblings. They all played, with songs before bedtime mandatory. A young Jackson learned `special licks` from a chain gang kid; a water boy among the 100s of convicts slaving on Black Top Road all the way through Charlottesville and Rappahannock County.

In the 1920s and 30s, travelling bluesman Mississippi John Hurt sought shelter with Jackson’s family when passing through – joining in meals and neighbourly weekend sing-alongs. The songs came from all over, with the group often swelling to 200.

All this was put on hold when Jackson witnessed a country picnic turn violent, denouncing music and becoming a gravedigger.

In a chance 60s meeting Jackson was discovered picking again, teaching guitar to an insistent worker in a petrol station.

Jackson was convinced to travel to Washington to see Mississippi John Hurt, whom he had assumed was dead. A rejuvenated Jackson resumed playing publicly and touring the world. An Englishman named Eric Clapton asked Jackson for lessons.

The Piedmont bluesman performed a record fourteen times at the renowned Smithsonian Folklife Festival before dying in 2002 – the same year the Backsliders album Hanoi appeared.

I return the Hanoi artwork to its plastic cover, fiddling until it’s shut. I tuck the CD back on the shelf. My eyes drift further along to the name of King. There’s a McDowell, McTell, McGee and Rogers. There’s Smith, Sumlin, Thornton, Tilders and Tucker, Waters, Wilson and Winter. 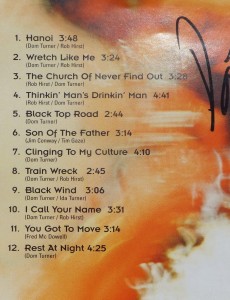