Down in the Lucky Country – beggars, charlatons and thieves (Melbourne, Australia) 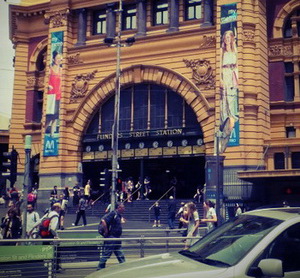 Straight from a long lunch, I raised my umbrella and headed for the pedestrian bridge. Crossing the river, I turned onto the station path; Melbourne cold and soaked after six days rain. I recall the soulful sounds of an upright two-string Vietnamese fiddle commingling with the distant strains of bagpipes that echo from under the bluestone bridge. There’s the flash of a tram – all green and gold – the city-bound clatter and the clang of a bell.

Looking at my watch, I’ve shaken the umbrella and turned to drop down the steps, I scan my ticket after dodging smokers engrossed in that final cigarette; the bang of the rotating barricade rebounding on tunnel walls, me passing busy office workers pushing in the opposite direction. At the foot of my platform up-ramp something stirred; a dark shadowed mound, commuters bypassing in the gloom.

Moving closer, I stopped short of my ramp. A hooded, stooped vision sat – a man I guessed – jacket back against the subway wall, surrounded by bulging plastic bags; blanket-wrapped knees pulled up under a stubble chin. And an ancient upright shopping trolley; tartan canvas ripped, miss-matched wheels.

I took the extra steps to drop some coins by the cup, before stepping back and rushing on and up the ramp. At the top I paused. Peering up at the board, I’ve missed my train, but really wasn’t bothered; preoccupied with thoughts of the man in the tunnel below.

I’ve asked the platform attendant. “Yeah mate, I know who you mean.” He shook his head. “Don’t see him much though; reckon he’s about 18. We call him Brian.” I must have looked surprised. “Yeah, we give them all names. I see new faces every day `round here. You know… I reckon there’s thousands of them. They could fill a football ground with the homeless here!” His eyes narrowed in thought. “How can that bloody-well be?” He again paused, scratched his chin and twisted the corner of his mouth. “I’ve no idea where Brian goes at night. Someone sees him across the road at St. Pauls when it’s really cold; after some charity soup I suppose.” He pointed up the platform. “But I reckon he sleeps in the rail yards. He don’t like the refuges; says there’s no privacy, so he moves around a bit.” I stared back down the bustling ramp to the tunnel; at the commuters surging up and down.

Today it’s almost twelve months since standing on that same covered platform with Brian sheltering below, me having again spent time in the great cities of Europe and the cultural smorgasbord of New York. I’m home, lucky to reside the a city of my choosing, and immersing myself in the largest cultural event in Australia – the Melbourne International Comedy Festival 2013 – but there’s also the eclectic live music that keeps me here; the architecture, film and theatre. There’s sport if you’re that way inclined. And yes, there are the people of course; dressed in ubiquitous tones of Melbourne black.

But here on the platform, there’s a lingering image that’s somehow returned; a darker side of the urban dream. It’s memories of Brian’s half hidden face that bothers me, down there in the subterranean gloom; seemingly oblivious city-goers rush and stumble past as he hides among his heaps of plastic. I can’t see his eyes but expect the light is already dimmed. He’s despondent with chin on knees, bare hands grey, knuckles white; a small plastic cup, empty and on its side; my loose coins scattered, shining but inconsequential. Him sitting on the damp concrete, bent knees pulled up; a grubby envelope, flat on the wet ground, smudged words in pencil by a shaky hand: ‘HELP PLEASE‘

I stare out across the rail yards and into the rusted jungle of tracks and posts. I’m stuck with the thought of Brian, still sleeping rough, lugging his meagre belongings and heading into another Melbourne winter.

I zip up my Gore-Tex jacket and lift my eyes from the rail yard maze, to the distant tiers and light towers of the Melbourne Football Ground; the 1853 `MCG’ being the home of Australian Rules football and considered an iconic world sports venue with capacity for 100,000 fans.

It seems appropriate that the Melbourne City Mission hopes for willing souls to pay money to rough-it; for the privilege of bedding down under the stars in the hallowed concourse, and to help end youth homelessness. The ticket includes a beanie, pillow and cardboard box to sleep on. There are bread rolls, soup and a meat pie for dinner. In the morning, breakfast is a muffin, with tea or coffee. I’m sure Brian would approve – if he’s still with us – especially if offered a quiet seat somewhere off to the side, along with a muffin.

The train pulls in with a rumble, my mind wandering to the plight of 105,000 homeless in this `The Lucky Country’ of 23 million, and the results of yet another survey awarding Melbourne the ‘Most Liveable City in the World’; along with the hopeful words of the UN Universal Declaration of Human Rights –

`Everyone has the right to a standard of living adequate for the health and well-being of themselves and their family, including food, clothing, housing and medical care and necessary social services, and the right to security in the event of unemployment, sickness, disability, widowhood, old age or other lack of livelihood in circumstances beyond their control.’

I wonder how the rest of the less-lucky world is doing.