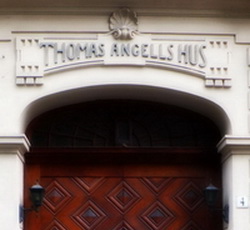 We had passed by here before, tall and ornate, diamond timber-panelling on grand double gates, always shut; the name in sweeping letters across the arched pediment above. This time – en-route to Nidaros cathedral – I pay little attention, until my girlfriend stops. Today, it seems an inset central door is open. We brave the stream of darting cyclists to cross the cobblestone road.

From the open door a sumptuous courtyard unfolds; sunlit, lush but apparently deserted. Another bicycle leans against a rendered wall, the 50-apartments classic Berlin Baroque. A kneeling woman bathes by a sprinkling fountain, blue water in pools offset; splashes of pink hydrangea in orotund urns.

A man appears suddenly, and looks up – a wiry customer with round-rimmed glasses and a ready smile – spade in hand. “A wonderful garden,” I offer. His eyebrows raise and we’re unprepared for his rapid reply, even though English is no surprise here. “Thank you,” he says, head slightly to one side, “you are Australian?”

Geir is a sailor – the water close to all Norwegians’ hearts – having braved the Queensland molasses run of the 1960s. “Ah yes,” Geir resumes, “they were tough days.” His steely eyes sparkle. “But I am young then, and quickly pick up the lingo.”

But what of this place? Geir looks around, waves a hand and talks of Angell. “Ah, he would not recognise what we have become.” Geir shakes his head from side to side, looking out to the busy street. “Angell was a rich man, but a man who cared for others. He built this place in 1770, a home for impoverished widows.” These days Geir is in his 60’s, an odd jobs man; the gardens and buildings his domain.

Back on the street, we glance back to the door now shut, then ahead to the towering cathedral and crypts where the Angell family now abides. Along the north wall we pass ancient elms on lawns of green, sun falling in crooked stripes across shaded tombstones. A young woman in gypsy garb sits cross-legged in our path. Both hands are tightly clasped, fingers and thumbs entwined in a string of beads. A spotted dog lay in threadbare blankets, protruding grey muzzle on a bulging shopping bag; the woman’s begging bowl and brown eyes empty.

A student stops, hitching her long skirt to raise a booted foot clear of the frame, propping her bicycle against a tree. Her head is wrapped in a paprika scarves, fair hair in Nordic style, braids falling down her back. The similarities between the two are not lost on me – both of similar age – although the student looks confident with her lot. Taking coins from her backpack, she drops them in the bowl. The beggar’s gaze lifts, one hand moving to softly stroke the dog’s head. The dog’s eyes half open, eyebrows grey; the tail wags.

As we pass, I catch the student’s eye and she nods. “You know her husband, he has left her for Poland. She has no home. Everything, it is inside the bag.”

Dragging the bicycle back to the road, she adjusts her grip and searches for the peddles. She pauses and turns her head towards the beggar. “The dog… you know… I have named her Louise; she is the patron saint of destitute widows.” 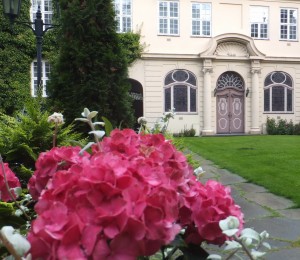