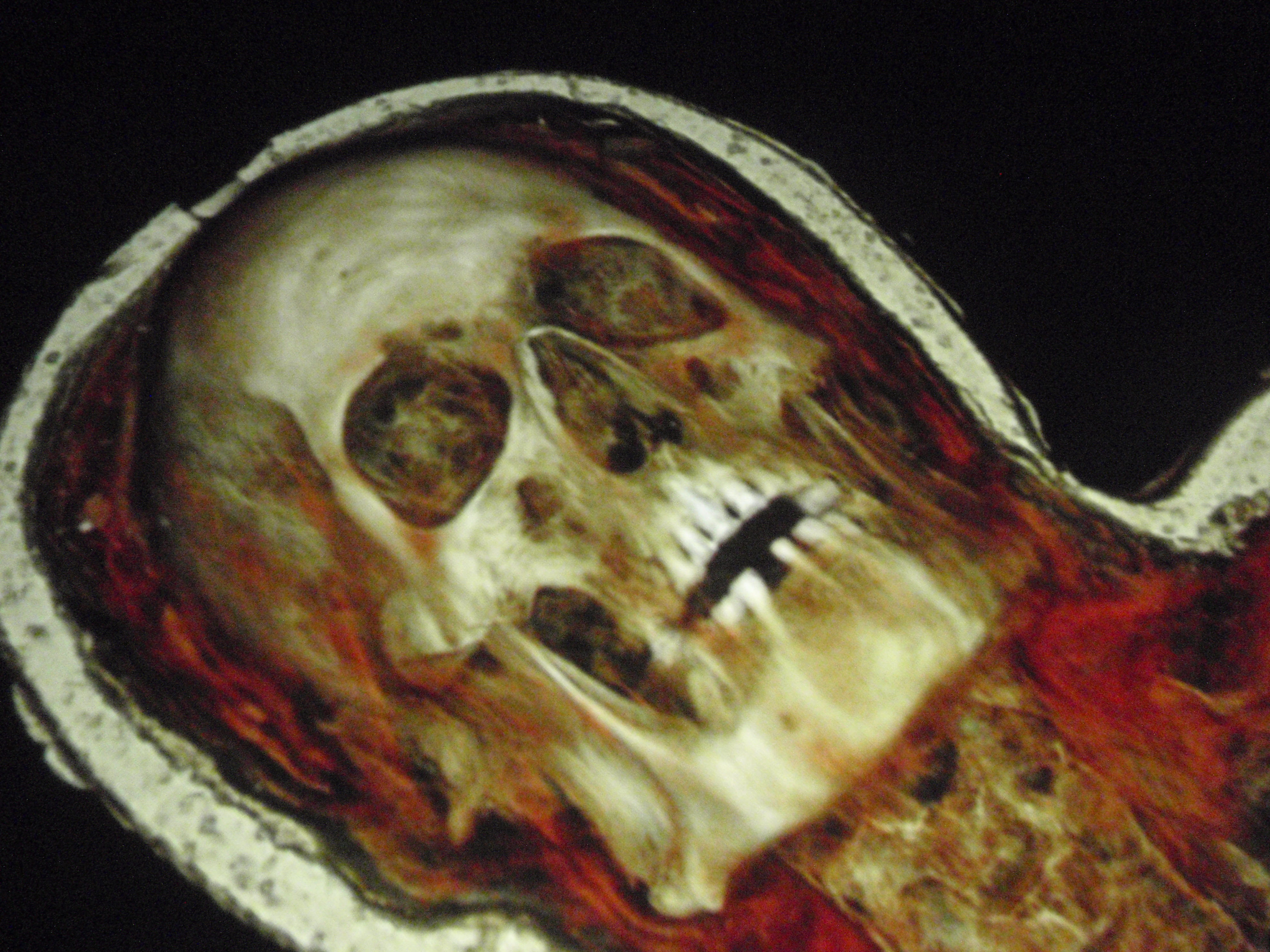 I’m in Tasmania drinking with Dave; a giant of a man with broad shoulders and no neck. He’s lived alone all his adult life, and sits at his normal spot at the bar, in  brown flannelette shirt and singlet, jeans and mud-caked Blundy boots. “Changed? Yeah, sure has mate.” He looks around. “Mmmm… not sure what me old mum would think!”

Dave’s first pint “doesn’t touch the sides”, and he wipes the froth from his mouth. “Been to MONA?” I nod. His eyes wander to the window. “Mmmm… to be honest mate… it’s a bit confronting.”

Dave’s “old school Tassie born and bred”, his father a possum trapper, lost in a freezing Central Plateau blizzard in “a shocker of a winter.” Dave was only 10, his mother “doin’ it tough” and dying young.

These days he “gets about a bit” having sold off most of the potato farm. He looks up from his beer. “I’ve been to London you know… I like a good museum.” He gazes over the road and water to MONA’s walls and rusted ramparts. “Not sure about MONA but.”

“My first visit to MONA was in 2011, at the end of a southern summer, and with the museum newly opened:

a chameleon collection of art set in an architectural creation on a bold scale – the `Museum of Old and New Art’ – and the realised sectarian vision of David Walsh with the help of Australian architect Nonda Katsalidis.

Once named ‘Australia’s top art collector’ by BRW magazine, Walsh made his money from gambling, developing a highly technical system with computer-geek friends. He has, he says, a gift for mathematics….. and outrageous luck. Once, having too much cash when about to fly home from Europe, he exchanged cash for ancient coins, thereby adding to his already considerable collection. After another overseas foray and returning with an Egyptian mummy, Walsh was asked to supply a death certificate.

I  recall a MONA attendant pointing to a solid door. “Only 2 allowed at any one time please…..and do keep to the path when inside”, she advises.

Inside it’s inky dark and ominous: an oppressive vacuum of silence. The narrow white path stops, my girlfriend’s breathing somewhere close behind.

Stepping stones are low, flat and square, surrounded by black: “real water” we’ve been warned. I’m momentarily off-balance as I reach a 90deg turn: a single round stepping stone directly below a stark face morphing from a black wall. The face emerges; just one dark eye, a heavy eyelid and long lashes. The pale, translucent skin has freckles – is oddly unsettling – uneven nostrils and pearly-white teeth under a pink upper lip. A white shroud hides the other eye and lower lip. We’ve been transported to a morgue.

I turn in the gloom, the steps again square, dragging my gaze away from that face now behind me; acutely aware of that vacant unsettling stare, and my girlfriend’s unsteady steps following in the darkness.

Ahead are 2 white obelisks: on my left a sealed Egyptian sarcophagus, to the right Walsh’s now legendary Egyptian mummy.

I’m startled as the mummy’s magical wrapping dissolves before my eyes, revealing ancient red tissue and skeleton; Walsh having commissioned the local Hobart Hospital to provide the photographic scans.

On that first visit to MONA, we’ve caught a ferry from the city to the Moorilla Peninsula and descended a glass circular lift at MONA, down 17m into a bunker with a well-appointed bar; ornate antique chairs in lush multi-hued velvet “for sitting on, not just for show”: a Walsh instruction.

20-something Dan is friendly and enthusiastic, as are all attendants, in their black tailored, ragged-edged uniforms. Dan assures us the stupendous walls of rough-hewn sandstone are “the real thing; the entire Moorilla peninsula made of the stuff.”

We’re handed iPods locating exactly where we are and any nearby displays, along with all the background we need, including ‘art wank’ reviews. We tap ‘like’ or ‘hate’ on the touch screen; our opinions kept for posterity.

A waterfall spray cascades down a sheer sandstone rock face, the light and droplets forming the top Google words of the moment, all on high rotation.

A row of filing cabinets are not the normal office variety – nothing’s normal here: a vertical bank of more than 50-drawers, each with the blink of a life inside; on the front of each drawer, a small 3-D face: a bank of peering orange faces, each willing me to choose just one. I grip the handle and pull, surprised by a baby voice: “I love you”, repeated over and over; the open drawer revealing a black plaque with an engraved poem. The faces and disembodied voices are all different, the written words a dedicated poem, romantic and poignant – some achingly so.

Along a cloistered corridor, we’re met by MONA’s most provocative displays in semi-darkness: an array of human anatomy, the distorted, forlorn form of a dead horse hanging from a rope, and the chocolate-moulded half torso of what’s left of a hooded suicide bomber.

There’s something unsettling about having to choose to give yourself a ‘lethal injection’ while sitting in a dimly-lit room on a comfortable lounge chair.

In the gloomy environs I lose my girlfriend more than once. There are no labels, no descriptions, no fences, no ropes or barricades.

We’re dwarfed by Sidney Nolan’s 1620-panel, multicoloured ‘Snake’, winding its 45m way through the main gallery. A machine mimics the full gamut of human digestion, and an oddly obscene ‘fatcar’ Porsche with black leather seats and gleaming red panels bloated and on the verge of bursting.

A giant earthlike disc hangs from  the wall; a Damien Hirst spin painting with a mysterious inner glow. On the floor below are 2 penguins in earnest conversation, the taller with head tossed back, beak open wide; a reassuring flipper thrown over the shoulder of his companion.

Another display pays homage to the mystery of numbers, maybe a nod to Pythagoras (or could it be Walsh?): to those magician-mathematicians of yore and a mystical binary system that uses only the numbers `1’ and `0’. The vibrating hum of some secret transformer invades the senses as I wind along a rectangular labyrinth, between grey walls covered in the hypnotic forms of binaries, until I stoop under a low lintel to reach the dark heart.

I enter the cramped space and instinctively look up, startled by the roof appearing to fall on my head; my unexpected reflection, complete with my glowing MONA iPod in hand.

The doors are already closed to late arrivals; attendants begin to muster, readying themselves for day’s end. Outside we linger among high rusty ramparts on an elevated patio by a full size concrete mixer made of rusty iron lacework by an ecclectic Belgian artist.

Dan has an aunt who worked for the first Moorilla owner Claudio Alcorso. He stops as he passes, his gaze taking in the Derwent and his straddling city of Hobart. “Alcorso? Sure…”Dan sits his a leather shoulder bag on the grass. “…be happy to help. It all starts with Claudio establishing Moorilla vineyards in 1958”. I exchange glances with my girlfriend, with her not even born. “Yes, many years back now; Claudio having fled a fascist Italy in the 1930s. Interesting that after that,he was interred during WWII.” Dan shrugs. “Afterwards he moves a successful textile business to here, of all places he could have gone.” I wonder aloud at the choice and Dan scratches a newly sprouting moustache. “A visionary?  For sure”, says Dan, “a passionate patron of the arts and really, the father of the wine industry down here.”

David Walsh buys the property in 1995, then an operating winery, and creating `Moorilla Museum of Antiquities’– housing his private collection of South American artefacts, Roman mosaics and African tribal art. He soon realises visitors are more interested in the wine; MONA construction starting in 2007.

Dan points to the foot of the steps and we stare; Walsh having arrived in a shiny 4WD and is bounding upstairs with a hound the size of a small pony; Walsh’s grey-streaked hair streaming behind him in the freshening wind.

That night we relax a Katsalidis cabin named Roy; with all accommodation named for architects and artists – in this case another Australian architect: Sir Roy Grounds.

At breakfast we overlook manicured green to an open stage….and Walsh walking the dog. I see a confident man; not the reported misfit nerd of a kid from the shadow of Mt Wellington and working-class Glenorchy, the youngest of three siblings who went on to become a university dropout, broke at age 25.

Dave is up to his 3rd pint. I’m pondering the immensity of MONA just over the road: sad, beautiful, breathtaking, romantic,enlightening, inspiring, visionary, funny, shocking; or is it just plain gross? I’m thinking all of the above; with a dash of the dark, the ominous and mysterious.

And I wonder about Walsh, and when the man first mooted this grand idea, having had the vision and the courage to see it through; not burdened by the personal criticism that would have come his way from the establishment, or the notion of whether visitors liked or disliked the displays.

I do agree with Dave though: MONA can be confronting. 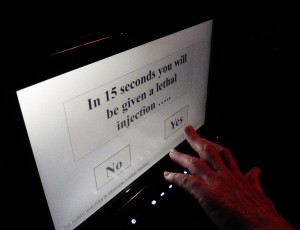