Just off Broadway I’m in a side street by City Hall, the ubiquitous New York crowds somehow missing, the hum of traffic vague and distant. A lonesome monument sits silent and tucked in the shadow of City Planning offices and a 30-storey Federal skyscraper; that building’s construction leading to the 1991 discovery of the largest North American cemetery of Africans and those of African descent. This is a small corner of a much larger 17th and 18th Century ‘Negros Buriel Ground’, originally 2.6Ha and the resting place of 15000 men, women and children.

With New York’s voracious growth, the burial ground was long-forgotten. On this small corner alone, old buildings had been demolished, the ground re-filled and covered with the new; the remains of 419 souls found 8m below where I stand. With the discovery, all building work here stopped, with a traditional African ceremony to rebury all remains in 2003. Then began the six day `Rites of Ancestral Return’; the journey beginning at Howard University in Washington DC – where the appropriate research took place – the procession moving through several major cities and finishing back here in New York; work on this, the African Burial Ground National Monument completed in 2007.

From the street I step past green grass and seven earthen mounds, the reinterred remains; each re-buried in hand-carved mahogany coffins from Ghana, and each lined with African cloth. I stand for a moment by a giant tilted panel in dark grey granite, with the reflection of City Hall, the carved shape of a cemetery guardian, and the words –

`For all those who were lost

For all those who were stolen

For all those who were left behind

For all those who were not forgotten’

There’s another tilted panel behind, forming a roof; shelter at the entry to the libation chamber beneath. A narrow ramp gradually descends to the centre of an open circular chamber, at the depth the remains were rediscovered – the sound of trickling water follows my footsteps – at the bottom the inner circle an earthly map, darker stone on a pale granite disc; the jigsaw of worldly continents. Scribed circles radiate out from a West African epicentre. I stand in the centre reading sentences that straddle an etched circumference, strings of words strangely cold and detached; unknown men, women and children; one recording :

The women laboured in their masters’ homes, the men on heavier work and civil building projects, children indentured from an early age. Lives were short. There was violence. Some died of overwork and malnutrition, others from smallpox or yellow fever. But with colonial laws banning gatherings of over twelve people, funerals were in effect illegal. No ceremonial accounts exist.

But there’s dignity in the written reports on the remains found; a small child with a silver pendent around the neck; a string of beads about a woman’s waist; bodies in horizontal coffins with the faces up and looking east, in preparation for the next life; burial shrouds and coins gently placed on closed eyes.

I read of one man’s coffin, with the now familiar heart motif, this time formed with brass tacks and nails on the lid; the West African symbol urging all to learn from the lessons of the past in preparation for the future. There is strength in community, perseverance, sacrifice and respect.

By 1643, free settlers had arrived from all over the world, already a melting pot of different languages, customs and religions. A French priest claimed to have heard 18-languages on a single occasion, in a settlement of only 500. `New Amsterdam’ was granted the status of a Dutch city in 1653, with the British arriving in 1664 and promptly changing the name to `New York’.

In 1697 a law forbade any African funerals in the city public cemetery – no matter how small – with all Africans buried north of the city boundary. By the 1720s around a quarter of New York’s labour force were slaves. In 1745 the city expanded northwards; with the new city wall bisecting the existing burial ground. Final closure came in 1794, the land subsequently subdivided and sold off for development.

I hear footsteps at the top of the ramp, a stray passer-by; the outer circle a rising path up to the street pavement, with shining steel balustrade one side, low vertical wall on the outside. I run my hand along the face of the perimeter wall as I walk – shining marble – smooth, cold and black; bold African motifs mixed with eerie Manhattan reflections of modern city streetscapes. 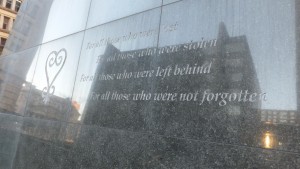 `For all those who were not forgotten’ – Lower Manhattan, New York