Lofoten Lost Dogs – back from the brink (Lofoten, Norway) 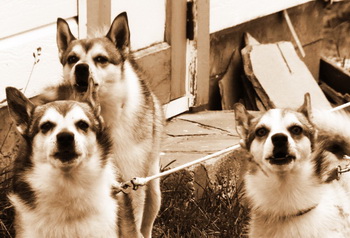 “Puffin dogs?” Hege shakes her head. “You know, there are none on the island at this point in time?” I’m speechless with disappointment. “Yah,” she adds, “but there were hundreds here last week.” It seems we’ve just missed the Norwegian Lundehund Club 50 Year Anniversary – a meeting of puffin dogs from around the world.

Værøy (‘Weather Island’, population 780) lies off the southern tip of the northwestern Norwegian Arctic archipelago of Lofoten; an ‘awe-inspiring’ part of the world according to National Geographic. Magical Værøy has cave paintings, Northern Lights and soaring birdcliffs inundated with 1.5 million nesting seabirds in summer; eagles, kittiwakes, cormorants, auks, eider petrels….. and puffins: the cute yet fierce adult with a powerful neck and beak, along with razor-sharp talons; the single chick so spoilt and fat, that only after days without food can it wriggle from the burrow to be pushed, or ‘puffed’, by the adults to the sea, before it can fly.

To get here my girlfriend and I have driven 250km southwest from Tromsø, off-season late August to avoid excessive tourists and twitchers; the downside being no nesting puffins. We’re staying at the northern end of Værøy in Hege’s `Chicken House’, in what was once part of the Lutheran vicarage.

In the morning we head for the old airport, a failed enterprise plagued with irregular flights in viciously unpredictable winds. A terrible accident in 1990 left all passengers killed, the captain’s body never found. It’s an odd feeling gazing over the intact but eerily deserted tarmac as wind whistles around the control tower.

At the low Isthmus of Eidet we cross on the remnants of an all-weather road – a ragged row of rough-hewn flagstones each side – emerging above the even wilder waters of the eastern shore. We turn south to climb a narrow, exposed path cut from the mountainside; rusted chain between us and the wild surf far below. Around a corner we halt to take in the immensity of the granite-gneiss backdrop against the Lilliputian gaggle of huts propped at its base. This is what’s left of Måstad, the birders’ town – once home to 150 hardy souls and their puffin dogs – mostly dismantled and reused in the new but distant town centre of Sørland.

Our path leads down to village flats, across moss-laden culverts and tumbledown stone fences adorned with splashes of early-autumn wildflowers. Broken paths and retaining walls testify to the birders’ existence. The timber grain of a weathered wall feels proud at my fingertips, the wooden boards coursed by innumerable Arctic winds. I kneel and push groundcover leaves away from sprigs of tiny blueberries; slightly sour, crunchy and delicious.

Listening to the surf battering the ancient stone slipway, I search for more berries and inadvertently smear blue dye on my face. The mud by my boot has revealed a prehistoric six-toed paw print – a strange double-jointed dog with extra grip that can turn its head 180 degrees back over its own spine.

Next night we dine in Sørland with Aina and Rob. “Tough? I guess so.” Rob shares the Norwegian gift for understatement. The people lived from fishing and birding with the men on the ocean most days. The women and children handled the gathering of puffin chicks to make ends meet.

“You know, Norway in those days was very poor, something difficult for the young to understand.”’ Rob paused, looking across at the kids playing.

He smiles. “Yah, the harbor at Måstad was dangerous, with sunken reefs, the town so isolated. We have hurricanes, and serious whirlpools here; the history books show us deaths each month.” Rob draws a slow breath, recalling the tough conditions. “Once a great storm hoisted a three-tonne stone and threw it, blocking the slipway. Rogue tides ripped at birders’ huts, dragging them to the sea.”

But what of my Værøy puffin dogs? “Ah,” adds Rob, “they climb rocky places, crawling into holes to bring back the chicks unharmed. In one night a good dog could bring over 20. They are clever, these dogs; alert and watchful, but wary of strangers.” But the breed once only found on that tiny pocket of Måstad beach, was not destined for an easy life.

Puffin netting began in the 1850s, neglected dogs killing sheep for food. On Røst to the south, government taxes made dog ownership a financial liability until only 50 remained here on Værøy; descended from ancient, pure stock that supplied a mainland breeding program in 1939. In 1943 the breed was formally recognized, only to see distemper sweep Værøy killing all but one of the island dogs; resulting in two pregnant bitches and two puppies arriving from the mainland to repopulate the island.

A further distemper epidemic swept the mainland the following year, with limited reinforcements this time sent from Værøy. By the 1970s, Værøy puffin dogs had been exported to other European countries, thereby saving the breed from extinction. In 1987 the first puffin dogs arrived in America, leading to 700-800 now worldwide.

Although marvelling at such a twisted story, I’m feeling low. Our preference for travelling off-season has hijacked my plans to meet a Værøy puffin dog, and we board the ferry for Røst.

At breakfast the morning is grey and as flat as Røst – `flat as a pancake’ in the tourist brochures – with 640 human inhabitants surrounded by 300 islets, and 2.5 million nesting birds in season, including puffins.

When I mention my fruitless quest to the hotel receptionist, there’s a quizzical look. “But they have all gone north of course, with the herring.” I wonder why the dogs would have gone even further north than Værøy. Once outside, my girlfriend looks at me and rolls her eyes, the receptionist obviously bamboozled by my rapid-fire colonial English, believing  I was asking about the puffins.

On our early-morning walk, cats stare from beneath crooked cod racks. Dogs bark from behind a dockside house with high-pitched, insistent yaps. Could it be? We exchange glances and I turn towards the source of the sound.

I’ve finally found my Værøy puffin dogs here on Røst, a trifle more feisty than expected. In fact, they are definitely not as happy to see me. I courageously step forward; the barking rises several decibels, and in my best Norwegian I attempt to explain how happy I am that they haven’t flown north.

But all to no avail; these stone-age throwbacks have mistaken me for a stranger. 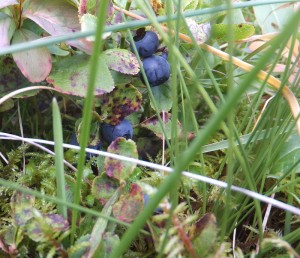