After the Opera – the sad passing of Marzipan the cat 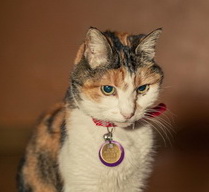 Many in Melbourne this week are mourning the passing of Marzipan, the grand old tortoiseshell diva of the city’s theatre scene. The much-loved Astor cat died on Sunday 24th March 2013 Australian time after a lingering illness, at the ripe old age of 21 years.

It was back in the early 90s when Marzipan made her debut, having appeared as a courageous young starlet from under a truck parked out front of the Astor; sashaying up the steps and through the front door, thereby claiming the theatre as her own.

With her arrival, Melbournians quickly took Marzipan to their hearts with doting patrons dropping by to say hello, and sending holiday postcards from all over the globe. Staff had Marzipan’s feeding duties included in their work rosters.

With her latest feature Feline of the Opera only recently completed, Marzipan is perhaps better remembered by some loving but rattled theatre-goers for her unannounced cameo appearances during the showings of Poltergeist and an Alien/Aliens double feature.

Marzipan is survived by 500 saddened Facebook fans and theatre staff who cared for her every need over the years. Fondly described by patrons as a gorgeous cat with a friendly nature, the iconic tortoiseshell will be sorely missed.

–          Those with photographs or recollections of Marzipan have been asked to send them to the Astor Theatre rsvp@astortheatre.net.au