Topknots and Talking Stones – the sinking of Easter Island (Chile) 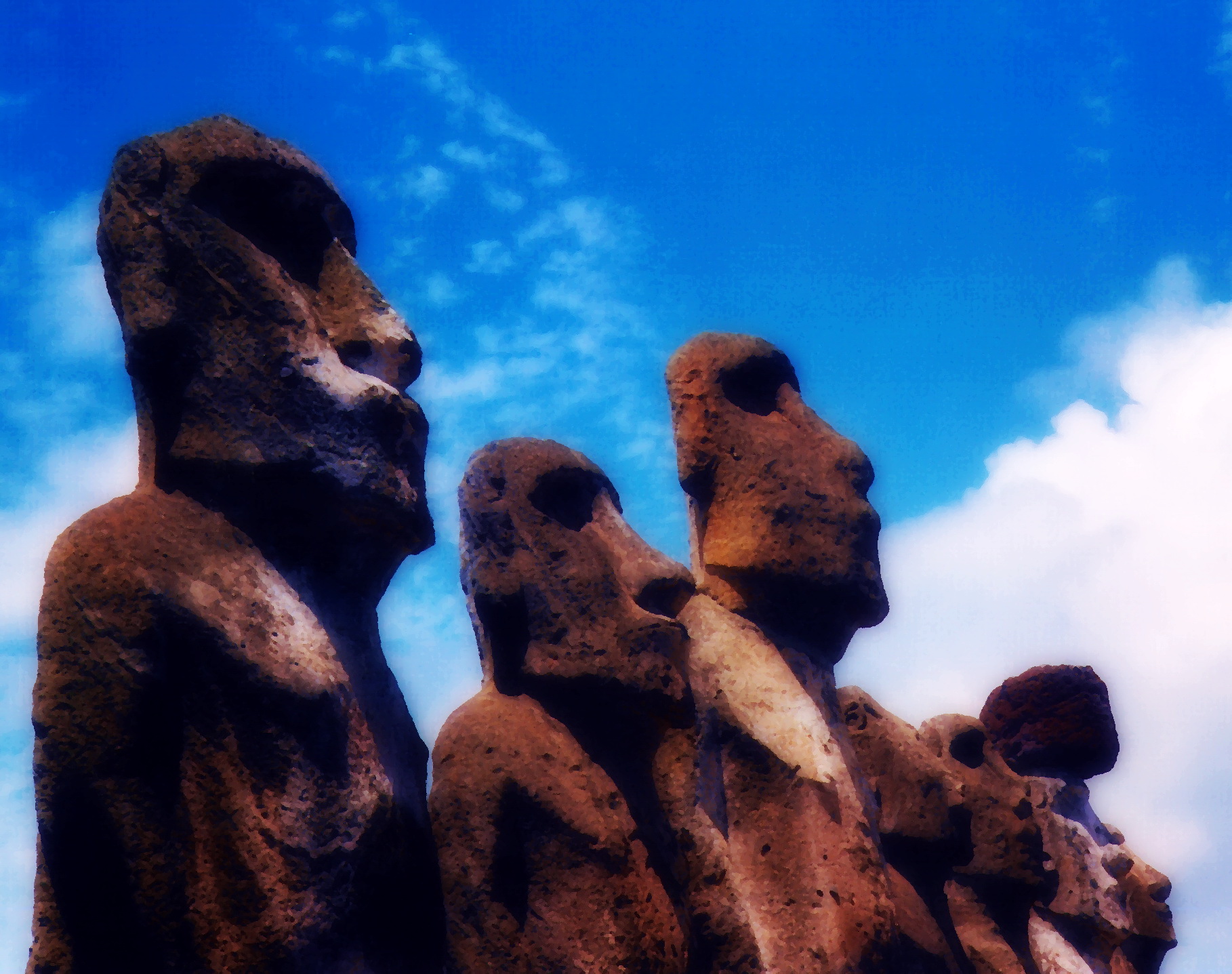 I’m met at the airstrip by Toi my guide, with a vice-like handshake and welcoming lei of yellow bougainvillea draped around my neck. Two skinny girls in grass skirts and goosebumps serenade to the strains of a ukulele played by a man in a knitted jacket over an Hawaiian shirt. It’s winter on Easter Island.

Toi’s home is on the coast, by the main village of Hanga Roa. He swaggers around his clapped-out Kombi, kicking tyres with dusty sandaled feet. “The roads, they are no good here. I must be checking for tomorrow.”

That night we walk a beach strewn with stranded sea cucumbers and mounds of fresh kelp. Toi talks of `his’ people. The air is still and southern stars line a curved horizon. These are the same constellations that guided the ancient mariners of the 5th century; aided by swell, the winds and the great god Make Make. Mainland Chile lay 3000km to the east and Pitcairn Island 2000km westward.

My guide is a restless soul with a mop of ragged red hair that sits in a topknot like some of the enigmatic statues here.  He is hazel-eyed, tall with muscle upon muscle. Tattoo stripes peek from his polo shirt collar and travel up to square set jawbones. He’s happy riding his horse and “doing the occasional guide thing”. And there’s a tourist market where he helps his mainland artist girlfriend and chews the fat with Rasta friends.

In the morning we leave the village in the Kombi, passing a 4m upright statue – a local moai – arms down, rigid at his sides. He stands alone and forlorn with his back to the sea. The wide, furrowed brow tops a long bridge of a nose. Toi twists in his seat and whispers. “Within each lives the spirit of a mighty chief. He is a much-loved brother, a father or uncle.”  I wonder where his bones may lie.

The Kombi rattles and shakes across a mostly forlorn landscape, passing a scattering of Australian eucalypts.  I’m in the middle of an island almost treeless, the palm and sandalwood forests long gone. We jump out and I’m struck by the quiet as we pass another moai – fallen this time – the first of many I see. My boots slip in rubble and clouds of dust catch in my throat. Another statue is 3m tall, although buried to his shoulders in the scoria of a crumbling volcano. He has a slight backwards lean and a skywards-tilted nose as if sniffing at the salty air. Long ears hang to the ground from a narrow flat-topped head, and I run my hand across a weathered shoulder to find chiselled `tattoos’ at the base of his neck.

Back at Toi’s place we sit in darkness, sharing mashed bananas and pumpkin wrapped in banana leaves and eating ceviche with our fingers. Tonight there’s an increasing chop in the Pacific swell, the broken surface catching silver chards of a waning moon. Toi clears his throat and blows streams of smoke from his nose. “I will tell you what the moai tell me Señor.”

Toi is a master, his tale ebbing and flowing like the sea. I hear the splash of oars; chants and shouts from brave folk I cannot see, the melodic singing of women. Broken streams of phosphorus trail behind mighty double-hulled canoes with tall prows; bound together with braided coconut fibre, cracks sealed tight with the sap of breadfruit trees. They arrive with taro and sugar cane. There’s breadfruit, giant bunches of bananas, coconuts, gourds and sweet potato. As with all their epic journeys, they come with pigs, dogs, chickens and rats.

But this place – at the end of the earth – is unlike any other; with coral at ragged cliffs in fits and starts, there’s no lagoon to stop the often monstrous waves. On cold nights pandanus-leaf shelters blow into the sea, leaving flimsy bark capes flapping on wet skin.

Toi pauses, rolling another spliff. “This is no tropical paradise Señor. There are few plants and animals. Not everything will grow.” He turns his head from side to side. “Look around you Señor, the island, it is volcanic. The fresh water, it is only in the volcano calderas.”

Before long there are only chickens and sweet potatoes left. Eventually there are 300 stone platforms around the island – called `ahu’ – dedicated to Toi’s ancestors; each with a row of up to 15 stone moai, overlooking huts shaped like boats. And now there are 600 unfinished moai scattered about the volcano quarry. Some moai and ahu are from the 8th century, with most erected between the 11th and 17th.

“But there is a problem Señor,” Toi continues. “There are between 50 and 100 warriors needed to drag each moai into place. There are many wooden rollers needed; and soon, no trees are left for the fishing canoes. Then the crops, they fail.”

Toi smells the air. The wind is turning, with waves heaving and crashing like dominoes on the beach. The wind tinkers with the corners of Toi’s rusty iron roof and we move inside.

The story continues. “With the forests gone, the birds desert us. They no longer come here, roosting only out there,” Toi waves a tanned and tattooed arm, “on the most dangerous rocks.” Toi goes quiet, passing a bottle of pisco. I take a swig, the woody sweet fumes going straight to my head. Toi smiles, then frowns. “Civil war comes and the moai are all toppled, except for those unfinished.”

Vicious wars continue into the 19th century, with survivors living in caves and resorting to cannibalism. Toi takes another puff and clears his throat. “Families, Señor, now they cower in holes. We do not do so well here, spoiling the land and living like savages. We gnaw on the bones of neighbours.”

Toi leans forward. “This is not the Polynesian way Señor.” The wind howls and rattles the iron roof as Toi exhales another cloud of smoke. “We lose our connection to the land, and we forget Señor, we are only the keepers of the land for our children.” 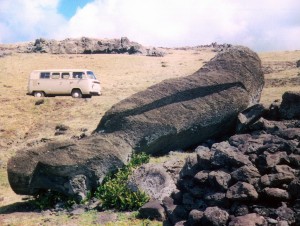