The Real Wild West – inside the Arctic Circle (Vesterålen, Norway) 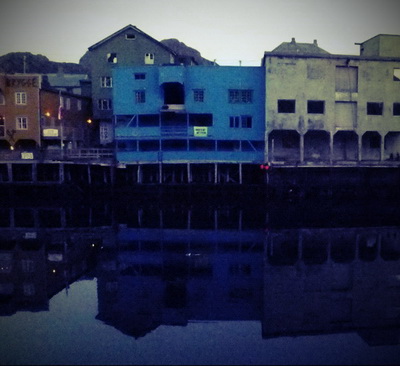 The narrow road is a roughed-out, potholed track gouged from ragged Norwegian mountains. Winding alongside a grey Arctic Ocean, it’s graced with the occasional passing bay and kept in place against northern tempests by discarded mountain boulders.

Turning a last cliffside corner I stop the car and push open the door, buffeted by a wild wind, the dashboard map flying into my girlfriend’s face and the door slamming shut against my shoulder. Farther along is a concrete-buttressed causeway snaking its way along the final 100m; an open camping space ahead and across the way a rustic Venetian vision with a Wild West twist.

We’ve flown 1000km from Oslo to the northern city of Tromsø, well inside the Arctic Circle, hiring a car and driving west for six hours via sweeping bridges and tunnels up to 3.5km long; all the way to the Norwegian island of Vesterålen. With Norway’s jigsaw geography of bridges, tunnels and skerries – along with the fjords and ferries – it’s difficult to tell where the mainland ends and these islands begin.

Once home to 1500 residents in the fishing season, the resurrected ghost town of Nyksund, was completely deserted by the late 1970s; the small port deemed obsolete due to its shallow waters and dangerous access.

These days there are about 25 permanent residents, due to a 1986 Berlin meeting with a German professor, working with juvenile delinquents facing possible prison. A last-chance offer was mooted, a summer project for 200 boys: hands-on clean-up work culminating in a second chance for Nyksund.

On our first night the air is oddly still; the weather fickle here. Lights from empty upstair rooms escape from small barred windows to throw fiery reflections across the canal. High gabled facades on leaning timber piles cast shimmering shadows that stretch to reach their partners on the opposite side.

Here and there among surrounding mountains, double-storey Shipping News timber-plank cottages go it alone, away from the gaggle of wharfside Nyksund; some perch and prop against impossible rocky knolls, with tie-down cables strung from upper walls to steel pegs rammed into rocky ground.

At the ‘living museum’ guesthouse Holmvik Brygge, our accommodating hosts are Germans seeking the quiet life – Jasmin here for over six years, and Ssemjon for more than a decade.

Dinner is a shared tasting plate of smoked seafood: strips of haddock, sea trout and something darker: a cube of whale meat. The Lofoten classic of cod tongues, is lightly doused in flour and fried with flair and a dash of curry; compliments of chef Ssemjon. The crisp German Riesling has a healthy dash of fruit.

“This summer has not been so good,” Jasmin confides, “no tomatoes, and the greens so slow.” It’s been wet for campers too, with many deserting tents for the drier environs of the Brygge, where each rustic room has its own personality.

Ssemjon smiles at the mention of weather. When Jasmin first arrived, he worried he may need to lock her up to persuade her to stay. Disparaging Norwegian southerners talk of two seasons up here: the “white winter” and “green winter”. Ssemjon’s fear proved unfounded – Jasmin loves it all – but she concedes “the white” brings ice and snow to “smooth over the potholes in Ssemjon’s road”.

In the morning kittiwakes shriek and whistle from the ridges and ledges of long-deserted lofts. Waiting chicks clamber for parents that swoop and soar on their return fly-past from distant feeding grounds. The wind shuffles stacks of loose cladding boards. We breakfast on hard-boiled eggs, toast, cold meats and black coffee, and gaze out the window at Jasmin’s “Nyksund television” to ponder the day ahead.

The `Queen’s Route’ is a five-hour hike over headland rock, earth, stone and peat, walked in 1994 by Norway’s Queen Sonia, taking in the island’s postcard mountains tumbling to sea, the sites of ancient AD 750 Viking and AD 1650 Sami settlements. There are bleaker reminders of a 14th century Norway in the ruins of towns decimated by the Black Plague; a time where two-thirds of the population were killed, leaving those remaining depleted and poor; a far cry from the Norway of today.

From Nyksund we walk the causeway, wind at our backs, scrambling up a rambling sheep track; the steep climb rewarded with a view over a Nyksund of matchbox buildings. Mountain sheep with long tails stare with bored eyes, the slippery mud imprinted with many cloven hooves.

Just below the summit of Sørkulen, we pick cloudberries at 450m; something akin to pale swollen raspberries. The ground is hard and stony underfoot, bluebells, sprays of mauve and yellow flowers sprout from sphagnum and moss-laden rock. The curled fronds of shining bright-green ferns seem too delicate for an alpine world.

Across the headland we look down on the village of Langenes, our path again steep and muddy. To the right, low black clouds hang over the tiny church steeple. Inside is a simple wooden frame to which a young girl was once desperately tied then tossed ashore by mammoth waves, the sole survivor of a terrible shipwreck.

From the small fishing hamlet of Stø, we’re returning to Nyksund by water. Olaf nods towards a small, bright-yellow inflatable boat hitched to a rickety wooden dock, straining at its rope leash and bobbing with each wave. I look at the billowing grey seas and then at my girlfriend; but it’s Olaf’s joke. My concerns are dispelled as he points a gloved finger towards a 6m state-of-the-art jetboat with twin motors and two rows of saddle-like seats.

Olaf dresses in the all-weather working gear standard here: a cross between patchwork, multi-coloured overalls and a ski suit. These days he takes tourists on whale and bird safaris and visits nearby skerries. “It has not been a good summer”, he reminds us, “lots of rain, with just some baby puffins left.” The parent birds having already migrated. “These are the weaker chicks”, he says with a resigned nod. “It is the way here; the eagles will have them.”

He whistles as we head out, his boat bouncing across choppy waves, “only 1.5m small ones today.”

He’s happy with his lot in Stø, his father and grandfather fishermen; his grandmother once cooking for the fishermen of Nyksund. Olaf’s son, too, has chosen a life on the sea.

I flinch as cold water splashes across my face and I look up at Olaf. “Some may be 2.5 metres,” Olaf concedes with a chuckle. “Tonight, you shall not be needing salt on your dinner.” Our fluoro, sea-survival suits are snug. With an ocean temperature of 12°C, it’s a touch warmer than the air that rushes past my ears.

On our last night we’re presented with a surprise at Holmvik Brygge: a garnish of Jasmin’s first lettuce of a tough summer, and her special apple crumble – her own grandmother’s secret recipe, but with a dash of cinnamon. She looks over at Ssemjon leaning by the bar. “Sometimes a little of the new can be good,” she says, “but not too much.”