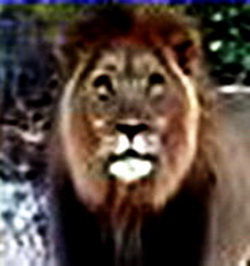 There’s another white dual cab propped on the wrong side of the road. I wind down the passenger’s window to ask if all’s OK. A khaki-clad man pauses, narrow-eyed and hesitant way out here, water bottle pulled from an open, dust-laden tailgate.

“Yah, the oldest desert in the world”. Karl’s a geologist, and nods his hatted head, the only other soul we’ve seen today. “For sure, this is true, there are not too many coming this way.” He’s slammed the fridge shut and tucked the bottle in a bulging side pocket, his sleeveless jacket the type favoured by well-off German tourists here; vest pockets full of pens and battered notebook, the back of those hands red from a searing yellow sun.

He’s interested in only “basalt” – raising those bushy grey eyebrows – “Yah… and maybe the possibility of diamonds,” having spent a lifetime in Damaraland mountains he “is knowing better than the Black Forest.”

There’s a bemused look on that sunburned face, the geologist shaking his head. “But you… you are going where?” Karl grimaces while pondering the thought. “You say… for 3-nights?” Silence again, him seeing no obvious sense in going “to a ruined diamond mine where there is nothing… nothing, but the winds, the wet and the cold.”

I look past the geologist, to a flat and looming redness, then back to a worn moonscape skyline, and our distant dust trail that somehow hangs in limbo. The words “wet and cold” some alien notion, all around an engulfing, sweltering silence; the only obvious living thing, an occasional 2000yr old oddity of a prehistoric plant with two lonely leaves invariably shredded by Namib dust devils.

The air conditioning hums, Karl’s dual cab just a speck in the rearview, endless straight ahead, daunting hot and harsh: Spartan but sublime. How much difference could another 80km to the coast possibly make?

Desert flats are sand, and scattered dolomite pebbles polished black by wind-born grit; way ahead a floating mirage, the imaginings of distant shimmering dunes shrouding a somewhere shoreline. The sky’s turned grey: a faded waterless wash, the road morphing to curves that blend and drift; some strange netherland not sand nor sea.

At Terrace Bay we finally stop, wash off dust, don jackets and bathe in cool sunset air while sitting on a raised concrete porch drinking hot mugs of rooibis tea. The sun’s long gone, the sky still grey – the horizon too – the incessant boom on a steep beach, pounded by constant crashing waves.

Morning sees giant concrete pylons emerge from mist, once supporting a giant pipe with water for washing precious stones: what’s left of an Onassis diamond mine; these 10m towers the skyscraper homes to black cormorant clusters, safe from wild Atlantic seas. Beady eyes stare, snake-like necks craning to take in our every move, our boots slipping on wet rocks and black, broken kelp.

It’s not difficult to imagine past hardships here, the failed dreams and lost lives, the bones of forgotten mines and over 100 ships that  litter a desolate coast: beached skeletons the wrecks of stranded wooden whales, casualties of an eerie phantom mist.

I turn my back to the Atlantic, and the cold air of a freezing Humbolt current, gazing east to the dunes, imagining shipwrecked sailors and the certain ordeal of trudging lost through endless dunes to perish in the Namib furnace from where we’ve come.

In the restaurant, I dine on tender oryx steak; my girlfriend, on linguini and garlic mussels, while the mechanic fixes our shredded tyre. The maitre’d wears a crisp white shirt and cowboy boots, restaurant walls covered with graffitied comments of adventurers from around the world; the wine a perfumed Stellenbosch Pinotage, the music Marley, Phil Collins and UB-40.

At the workshed, Josh’s impressed at anyone driving all day from the giant Etosha salt pan up north. “And you saw lions?” It’s late, with Josh now under the bonnet of a Mercedes truck as I relate an encounter with 2-lionesses refusing to move from the road in front of our car. He shakes his head.

In the morning we’re leaving, and I’m back at the workshed, having remembered the tank being almost empty. Josh clicks the pump into action and looks up. “You know, there is a lion that visits us here.”

I’m taken aback, not sure what to make of the now talkative Josh and the unexpected disclosure. I look around: the desolation and giant dunes, the great Atlantic sweep. Josh takes my point and smiles.

“A lone male tagged with a radio collar.” Josh leans against our dual cab, balancing the pump in the crook of his arm. “Yes, he sometimes comes by. But we get little warning. It is kept a secret until the rangers, they ring us. He visits local waterholes. You would have certainly passed them when coming here.” Water holes here? I make a mental note.

The Terrace Bay bowser rattles and churns, Josh wide-eyed now. “This lion, he is special, his land stretching north 500km, all the way to Angola. This one, he swims the Kunene River.”

Josh left the capital of Windhoek when still a kid; having high hopes of studying zoology in Johannesburg. There’s a wan smile on that black face. He did time in the mines and drifted to odd jobs and truck repairs.

“I arrive still young, and I hear of these desert lions. At first, like you, I say no way. But yes, he is roaming the beaches, looking for washed-up whales, seals and sometimes… he will take an oryx.”

I’ve seen oryx up north; the country’s emblematic second largest antelope and a living cave painting; a dangerous option for a lion, being sometimes impaled on those sharp spear-like horns. But it seems there are other dangers for a lion.

The tank is finally full, Josh dropping the nozzle on the rusted bowser bracket but happy to continue the tale. “It is so interesting, this story of the lions.” He suddenly stops, and I assure him I’m listening. There’s a flashing white grin before he goes on. “Before that time, when I arrive in 2002, there had been no lions here for over 10yrs!”

I must look doubtful, but Josh is insistent. “Yes, it is sad, but there had been trouble with the local people. They are so poor, with not so much food; kids and old people, few cows and goats.” Josh nods. “There are problems with lions.”

Even more recently, there’d been one animal – collared like Josh’s lion – killed by a trophy hunter, then another shot shortly after, the fate of that small desert pride sealed with the death of the remaining two: sisters poisoned with strychnine.

Josh looks up into surrounding dunes. “But this lion, he is still with us… somewhere.”

Crashing waves drown the whirr of a distant helicopter: a silent north-bound speck high above, heading for a newly-built airstrip; the frontline in the Namibian search for oil and offshore gas. “We are a small nation of only 2-million….so we need this. It is for the future.” Josh’s voice lacks conviction.

I sympathise, my thoughts too with Josh’s lion. We both stare north along a mist-bound coast. “Always alone that one.” There’s a wave of Josh’s hand. “He travels up and down the coast; all this his kingdom.”

Heading south we see the waterholes just off the road; secret reed-bound, oasis oddities and patches of parched grass; Atlantic to the west, endless dunes to the north, south and east. Flamingos stand on shining pink ponds: spindly stilted legs among silent mirrored brethren. Not 20m from where we stand, an oryx drinks, raising painted head to stare, rapier-sharp horns held high, sniffs the air and heads off, slowly turning for one last look from atop a dune. Today the king is nowhere to be seen. 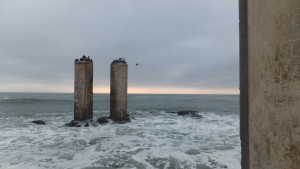