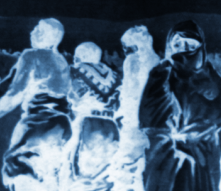 “I have sent for you and I am glad to see you.

I am going to talk to you after awhile about your relatives who are dead and gone.’”

From Pierre I catch the first available flight to Los Angeles, then home to find my father frail and tired beyond his years. He whispers something in a raspy voice. Leaning closer, I can’t make anything out. Tufts of grey hair sprout from his nose. There’s no follow-up sentence, and he drifts off into some morphine-laced dream.

That night I dream of a father I never really knew, and an American Indian ghost dance where men gather at a big tree and dance for five days. There are visions, and talk with dead family and friends. The Prophet promises he’ll return – when winter passes – with the ghosts of our fathers.

On balmy summer evenings we sat outside on a small square porch of outer suburban concrete, among smoky drifts from my father’s cigarettes – under starry skies, mostly in silence. My father, in his hackneyed white singlet, pondered his own private world with the occasional word to a doting red dog at his feet.

Sometimes he cranked up the record player and suddenly let fly, joining in with the Italian Enrico Caruso – the famous tenor, after being apprenticed to a mechanical engineer at age ten. He gave hope to my father who dreamed of travel. Returned to his ponderings, they were punctuated by the crackles of dust on long-playing 78s, and the rise and fall of the great tenor’s voice.

I’d keep listening – it seemed forever – to the click of the mono stylus at the end of the record and the occasional buzz of a mozzie. My father had drifted off to parts unknown; the glow of a cigarette butt in sync with his breathing, making waves in the warm air as it left and returned to his lips. In the light from the half-open front door, scars protruded from his right bicep: stark white weals track the length of a brown, muscled arm.

My father was knocked off his bicycle at 17 when riding home to my grandmother’s house; his front tyre slipping on a greasy tramcar track. He lay trapped between steel wheels – along with the wreckage of his bike – until pulled clear, unconscious. His arm hung from bloodied bone, sinew and skin. When doctors insisted the arm be amputated my furious Scottish grandfather steadfastly refused.

Never a good sleeper, my father lay in the front room with little to ease the aching – and lots of time for reflection – waiting for the clip-clop of the milkman’s draught-horse Bobbie, the jingle of empty bottles heralding another daybreak.

He swam first thing in a cold pool daily – rain, hail or shine – to regain the use of his mangled arm, while balancing night school with long working hours as an apprentice on the machine-shop floor.

In the early-morning gloom I sit at my desk and daydream bleary-eyed. There’s a twinge in my shoulder. I scratch a hairy earlobe and gaze out the flywire screen door to the street. I hear the pitter-patter of Canine feet and follow the glowing ember of a dog-walker’s cigarette blinking on-off, on-off. The flickering glow looks strangely familiar. The voice of Andrea Bocelli wavers from the CD.

My father is here. 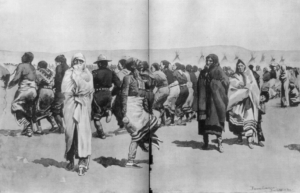