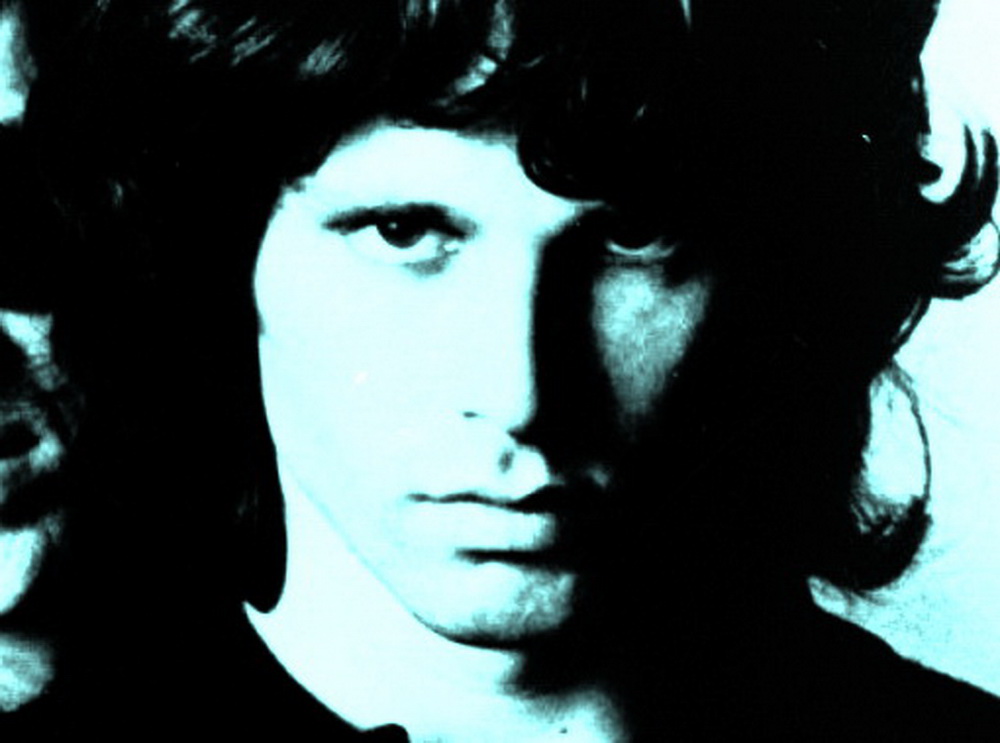 There’s a raspy laugh, parted purple lips, a toothy gap and shining silver orb perched on a pierced tongue. “French? Me?” Mascaraed eyes shine from an impossibly pallid face. “Like… God no.” There’s a slight lisp, the word ‘God’ stretched for effect, the intonation classic Celtic.

I wonder what she’s doing here among the buckets, pots and vases of a Parisian cemetery flower stall.

“Oh well, it’s a promise I guess; like… I made it to myself. And my stepfather, he helped.” There’s a pregnant pause. ” Oh…and there was a boy.” For a moment those green eyes turn to meet mine, before returning to straight ahead.

Her stepfather’s a muso, and it’s Layla’s 19th birthday tomorrow; ‘tomorrow’ being December 8. I offer to pay for the hydrangea Layla now holds, but she shakes her head.

A stooped matron marches past, blue-rinse hair, prancing, sculptured poodle on taught diamanté lead. There’s a disdained “Hmpf!”, and a sideways look to sink a ship. Layla shakes her head, having seen it all before; a lone Goth from a small Irish town near Belfast, now “in the City of Lights till things settle”.

Layla stares down at the flower in her hand. “The most important kind of freedom is to be what you really are.” She pauses to gauge my reaction. Yes, I’m familiar with Jim Morrison’s prose, and Layla’s surprised, but pleased. “Well, I just know all his stuff. It’s… like… you know, he’s always around.”

To get here I’ve wandered from Ile de St Louis, by Notre Dame and across a bridge full of padlock dedications from teenage lovers, passing City Hall skaters and the telltale swish of steel on ice; a side alley lined with parked bikes ends in a plaza and giant painted face staring from walls of red brick and mortar.

From there I’ve  headed east to Blvd Voltaire and along Rue de la Roquette: to this rolling tree-lined Bohemian cemetery opened to ease the issues of a rat-ridden city: the 44Ha Pere Lachaise, initially shunned by Parisians until a city Prefect moves the bones of renowned French citizens Moliere and Jean de la Fontaine to here; Moliere the actor .at first buried among the unbaptised babies.

Chic French urbanites soon follow suit; with aspirations to one day dally with the rich, the famous, the artistic and risqué. There’s most of Chopin, his heart in his homeland; the first French President too, having died in bed with his mistress while in the throws of oral sex; and a once-infamous journalist, his reclining and suited form with a prominent sculptured fold in his pants, the bronze bulge polished from the constant rubbing of women wishing to fall pregnant. I am in Paris afterall.

I’m moved by the tale of Abelard, the great French philosopher: a doomed love affair and an illegitimate child, the man castrated and his lover sent to a nunnery. I stand in silence, their bodies finally together beneath this delicate sepulcher, a pile of lovers’ letters just inside the picket fence.

Oscar Wilde is here too, convicted of ‘gross indecency’ in England; now entombed in a lipstick-stained tomb of Egyptian Art Deco once adorned by a well-endowed angel with dangling genitalia.

Layla has seriously black eyebrows plucked within an inch of their life, and permanently raised in questioning mode. She’s “into street art and architecture.” I see myself at  her age: no teetotal Vegan, but maybe just a dash of Goth; me coming out mostly at night, haunting darkened, boozy pubs and doped-up music dives in the company of kindred spirits, ‘Morrison Hotel’ on constant replay.

Layla lets down her guard for a moment, allowing me to buy her peppermint tea and crepes; for me it’s a coffee and a shot of brandy. I just can’t reconcile the fact that ‘The Lizard King’ had already been dead for over 20 years when this clean-living, slip of a Goth was born. There’s a shrug of black-leather-clad shoulders. She doesn’t see my point, and looks down at her watch. Time is short. Layla has an appointment for a haircut, tomorrow the big day.

I wish her a happy birthday for tomorrow. We say our goodbyes, the diminutive 19yo with a dismissive wave, a raspy laugh and another Morrison quote: “Some of the worst mistakes in my life were haircuts.”

Back from the cemetery it’s late afternoon. I peer through frosted attic windows, rubbing the glass to reveal a web of bare winter boughs outside. The iPod strains of The Doors “This is the End” mix with the shouts of French School-kids from the courtyard next door, my cosy apartment a haven to random nostalgic recollections.

I wonder what a 19yo tee-total Goth could possibly have in common with a 69yo, and recall Layla’s knowing smirk at the mention of the singer’s age if he were here today. “Well, Jim was in a band called The Ravens you know… before The Doors, and I’m thinking he was just so beautiful: dark clothes and slick leather, those steamy eyes, the shaggy hair, and those sexy cheekbones.” I remember Layla’s fading smile, and flashing green eyes shining from smudged pools of black. “Jim… like… he was a true Goth!”

Morrison died in 1971 age 27, either in his bed or bath, depending on who we believe; after leaving the high life of Rock and Roll to live here in Paris for only 6-months. At first buried in an unmarked grave; then with a simple marker, and then a bust. Both were stolen. With the 2008 hiring of a guard, the pilfering stopped. Now there’s a simple block engraved in Greek: ‘According to his daimon.’

I’m thinking of the legions at  Pere Lachaise Cemetery tomorrow, well before dawn: the worshippers, the ageing fans, the lost and musically inclined; and a diminutive but feisty Irish Goth who shares Jim Morrison’s birthday; her with a talent for quoting The Lizard King and no doubt holding her own in crowded ques while clasping a single turquoise hydrangea between black fingerless gloves. 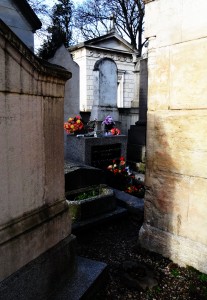 ‘According to his daimon’ Pere Lachaise Cemetery, Paris