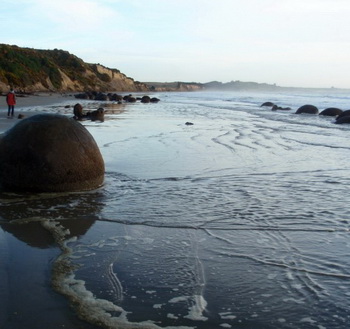 We linger in the dark after coffee, among deserted café chairs of bleached wooden slats, tables and simple benches. The air smells of seaweed, salt and garlic. The night cries of wheeling gulls float across Moeraki Harbour – ‘sleepy sky’ in Maori – as little blue penguins nest between waterline rocks at our feet.

The café waitress has suggested we seek out a guide: “an odd loner who drops by every year.” So today we meet Neville; a pasty-faced, man with a confident, slow-talking manner offset by that peculiar Kiwi lilt. “You’re wondering what I’m doing down here?” We’re not, but my girlfriend nods.

With his family outside Auckland, Neville spent his early days boarding at King’s College, finally moving south to Christchurch and Canterbury University for a Masters and PhD. I exchange looks with my girlfriend; Neville doesn’t seem so odd.

It’s still unclear what Neville actually does, but he hasn’t finished. “I’m a geologist,” he offers. “Spend my time between up north and down here; wherever they find a job roaming beaches.” He laughs and picks at the brim of a battered sombrero. “Need to wear this though; otherwise my face burns something shocking.” We gaze across the harbour. “Get to some isolated places too. And then there’s the weather. Never know what it’ll do down here.” We stare up at a cloudless sky.

Neville looks around, this is the site of a 1936 whaling station where the hapless beasts were once hauled up and butchered. He tells of a more recent visit: a whale swimming within metres of where we stand; the creature “apparently the father of a respected Maori elder”.  Neville is smiling and continues with a brief history of NZ. “Well, just imagine this entire South Island as a canoe from where the Maori demigod Maui hauled the North Island from the sea like a big fish.”  I ask how he knows these stories and he matter-of-factly shrugs. “We all learn them at school.”

My girlfriend enquires about the Maori down here. Neville says there were never very many, with only seasonal visits to hunt and fish and to collect the famous NZ greenstone. The last full-blooded Maori had gone by 1900, drifting back north and intermarrying.

Next morning we rise in the weak dawn light to take advantage of the low tide. Seabirds cry unseen. We plan to walk the ruined railway cutting westwards from the village, on a path lined by rambling bushes of banana passionfruit and clumps of grass that sprout startled rabbits. Dropping down to the rubble and sand, we meet Neville by the water; then amble along a flat beach. The ring of a bellbird greets the new day from somewhere onshore, as the first sun throws shimmers of light on rolling ripples that splash at our boots. Three wary Oyster Catchers whistle and run; red stilt legs a whirr on a mirror film of water on sand.

After 30min, Neville stops and points to distant shoreline specks emerging from sea mist. Continuing on they gradually evolve into odd, but perfectly round boulders up to 2m diameter; the gargantuan marbles of playful giants. We tramp on until finally standing among half-buried spheres. They really are impossibly rounded, cold and smooth to the touch; the surface etched with hairline cracks in crazy patterns. Some boulders nestle like eggs against steep sandy cliffs that rise to rolling paddocks.

The smallest have been souvenired in years gone by. “Just picked up,” says Neville with a hint of disgust, “thrown in wheelbarrows and taken wherever.” Others lie shattered in pieces as if exploded; cracks turning to fractures in the extreme weather. Tiny bubbles lay in frothy serpentine streams and drift between shallow tidal ponds by each boulder; the strange bubble patterns a mix of saltwater impregnated with air.

Neville looks up from a boulder, then out to sea. “Long time past, during the great migrations, a war canoe floundered just here,” he points eastwards, “in raging seas; a giant mono-hulled craft hewn from a single tree, a hundred men drowned.” I follow Neville’s gaze to a darkening sea and picture hapless warriors flailing in ferocious waves, their canoe broken and bindings ripped; the tall decorated stern lurching at wild angles trailing flaxen pennants lashed by wild wind and water.

Neville’s brown eyes narrow. “Out there, the bones of the wrecked vessel are the reef; the sweet potato cargo now rock. These very boulders are the petrified food baskets; originally round gourds carrying Maori seeds and food.” There’s a smile on Neville’s freckled face as he seems to dismiss the legend. “Really, they’re just boulders of course; grey-coloured septarian concretions.” Neville points a finger in the direction of black sandstone cliffs. “The sea is slowly eroding those and uncovering new boulders; once the ancient sea-floor sediments of the Palaeocene period. We’re talking 60 million years ago.”

I’m impressed with the geologist’s ability to seamlessly cross from the Maori to the scientific versions, but Neville sets me straight. “They’re just a bunch of old stories,” he adds. But then we’re in for a surprise.

It seems Neville’s great-grandmother was a Maori from Auckland; his white Irish great-grandfather a `Pakeha’ in Maori speak. I find myself staring at Neville’s rusty shock of hair and freckled face; before he places a hand on my shoulder and explains. “Yes, yes, I know; most find it hard to believe.”  Neville pauses and chews the corner of his mouth. “So, these days I suppose I’m technically Maori.”  I ask what he means, and he answers that a Maori was once legally defined as half-caste or more, but by 1974 had become  `…a person of the Maori race… …any descendant of such a Maori…’ Neville stops for a moment, seemingly deep in thought.  “It’s a little contentious these days; but to me it means nothing. I know where I stand.”

Suddenly Neville falls silent, abruptly turning for some reason and looking away, northwards to Hampton Beach where billowing clouds now gather. There’s a speck of rain and we both follow his gaze to just below the horizon, where as if on demand, small rounded dorsal fins appear; the rarest cetaceans in the world: 1m long Hector’s dolphins, their short-snouted, milky-grey bodies splashed with distinctive black and white markings.

Neville seems pensive and not a little befuddled. “You know, I see them often here.” His voice is on the verge of a whisper as he turns to face us once more, his dark brown eyes thoughtful. “The souls of doomed Maori sailors and the prophets of bad weather.”