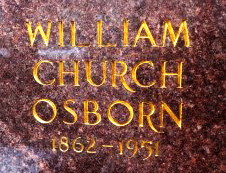 A small green plaque reads `Ancient Playground’, the entrance a pair of black cast-bronze gates  set between tall rectangular pillars of polished pink granite; topped by bears on the left – one upright – three deer on the other. The pillars are engraved in gold letters, dedicated to William Church Osborn –

A dogwalker crosses 5th Avenue, stopping by the picket fence and juggles three assorted dogs; a beagle, a Jack Russell and an errant Afghan. There’s a smattering of Central Park snow.

I catch the dogwalker’s eye and ask about the `Ancient’ theme. “Oh yeah, I see what you mean. It’s a European thing apparently, something from the 60s.” She waves across to Egyptian pyramids with her free hand, the paths, the sand and running stream; the building materials concrete, brick and wood. “It’s all about climbing, imagination and adventure. Do you know that playground rules prohibit adults unless in the company of children?”

Osborn studied law and served New York City in political and charitable tasks, although never seeking political office. But it seems this playground is not so ancient, constructed to replace the original built upon Osborn’s death; the gates – a creation of sculptor Paul Manship – installed there in 1953 and considered that year’s most distinguished artwork in New York City.

“Take a close look,” the dogwalker invites, as she again tugs at the Afghan’s lead. “It’s Aesop’s Fables of course, see?’” And as if talking to herself: “Mmm, not sure how many New Yorkers even know of this place.”

The gates are classic Art Deco, five of Aesop’s ancient stories in honour of Osborn, a busy man regarded as one of New York’s first citizens; somehow juggling Presidential roles with  the `New York Society of the Ruptured and Crippled’, along with `The Metropolitan Museum of Art’.

In his gates I recognise the familiar form of tortoise and hare, the crane and the peacock. There’s the lamb and wolf; city mouse, country mouse. A fox sits on the ground, looking up at a crow in a tree, cheekily asking if the bird sings as beautiful as it looks. As the story goes, the crow is duly flattered, opening its beak to say thank you and subsequently dropping the cheese; Aesop’s fables a fitting touch for a kids’ playground.

My ponderings are interrupted by the helpful dogwalker. “The original playground was over there you know, closed in the 70s due to work on the museum.” She points to the adjacent Metropolitan Museum of Modern Art. “The Osborn gates weren’t installed here until 2009.”

Her eyes are fixed on the gates, seemingly oblivious to the restless canine charges at our feet. “Can you imagine something so beautiful stuck in storage for 30yrs?” She doesn’t wait for an answer. 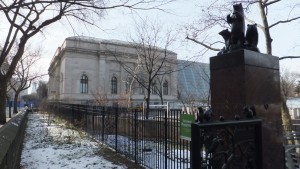