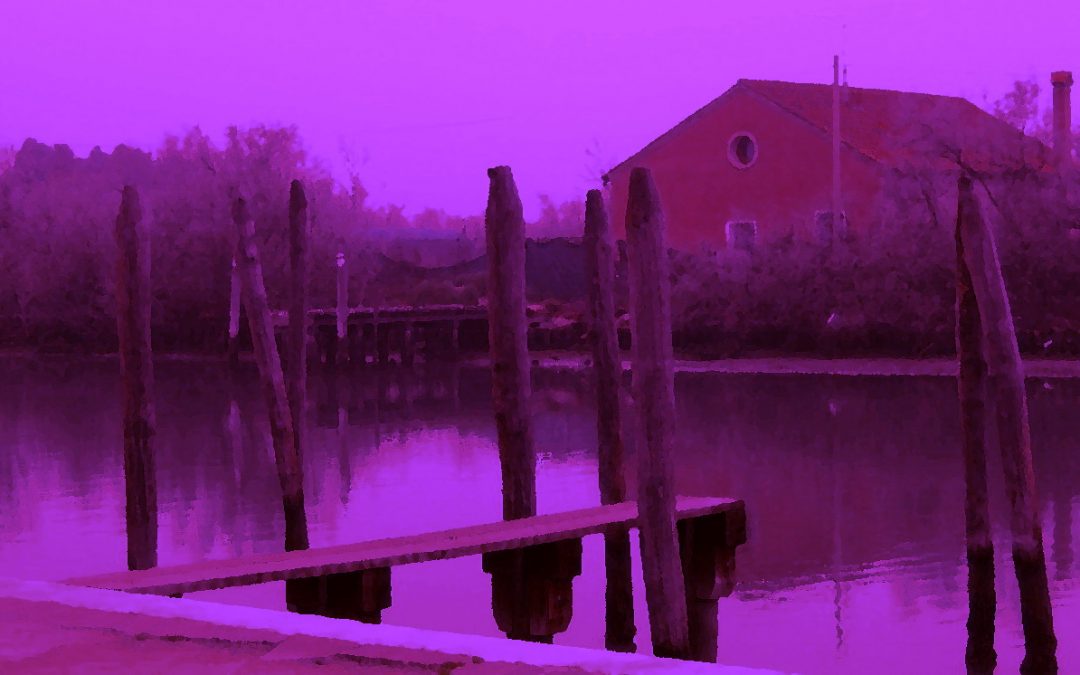 Broken walls topple, the last defenders with them. Canal bridges, city gates and the cathedral burn. Steel clashes with steel, horses’ hoofs pound stone roads and women drag screaming children, the old and infirm towards the hills and mountains. Columns groan and collapse in an apocalypse of billowing dust and smoke.

But some are lucky, floating silently away in the darkness down the Grand Canal and into the harbour. Hauling their boats on to the mud of the nearest islands, they hide among the marshes of the Venetian Lagoon.

The year is AD452 and a ruthless Hungarian king has arrived at the bustling port of Altinum. Attila the Hun does a thorough job and leaves, only to die a year later on his wedding night.

After 1500 years, the rising water and lagoon mud swallow the ruins until stones and masonry are discovered under farmland. I am standing near Marco Polo airport, 12km north of Venice, with my girlfriend. It is April at the site of Altinum city, a little bigger than Pompeii, now rolling fields of soybeans and corn. We are following in the steps of John Ruskin – English writer, philosopher, art theorist and a fine draughtsman – to another city of ghosts out on the lagoon, the once refuge island of Torcello, named after one of the burned towers of Altinum.

We change ferries at Murano and finally spy the Torcello belltower, then some pines and scattered buildings, in Ruskin’s words, “like a little company of ships becalmed on a faraway sea”.

Hedges of honeysuckle and briar are unchanged in more than a century since Ruskin’s day. Locanda Cipriani, our cream, two-storey doll’s-house hotel, just over a canal bridge, has stairs up to our quaint room. A balcony overlooks the bridge and the floorboards squeak. The six guestrooms have hosted the likes of Nancy Mitford and Ernest Hemingway. Ruskin, born in 1819, had two great loves: his second wife, Rose, who died at age twenty-seven… and the Venetian Lagoon.

Shadows lengthen. We bask in the early spring sun and the bubbles from a bottle of Veneto prosecco. Drifting across the lawns, jonquils, tulips and espaliered vines, is the hypnotic click of garden shears.

“You will be taking dinner, sir?” Our waiter stands at attention.

He is wide-eyed. “It is just, sir, that the chef, he leaves after dinner. Everyone leaves the island to return in the morning. It is the way here.”

Although surprised, I answer that 8pm would be fine.

We are both tired after a romantic late lunch. Upstairs, our dreams are fractured and I stumble across piles of discarded clothes in the dark to realise the offending noise is a telephone ringing. We’ve slept for five hours and it’s 9pm.

After dinner, a blanket of milky constellations stretches across the moonless sky outside. In the shadowy piazza, a cat lazing on a stone chair stretches to its full height.

Legend says this carved rock is Attila’s throne and anyone who sits here will be married within the year. How it got to this island of mud is anyone’s guess.

Fuzzy yellow lamps on tall posts guide us to the pier, past a jumble of artichoke paddocks.

At the deserted ferry hut, we are mesmerised by silver reflections that shimmer, and lapping water adrift ‘tween rows of wooden navigation posts that totter like drunken sentries. Ruskin’s Venetian tower lights flicker eight kilometres to the south, mingling with floating stars. I smell brackish water, cut grass and an inkling of my girlfriend’s perfume.

Next day at Attila’s throne it is difficult to believe this once-city held 20,000 souls. By the 12th century, the canals fill with silt, the water stagnates and malaria is rife. A portico connects the larger cathedral of Santa Maria dell’Assunta with a belltower shrouded in scaffolded renovation cladding the Baptistery, and the oldest church in the Venetian lagoon, the octagonal Santa Fosca.

Crumbling, ragged bricks leave orange dust on my fingers. The ethereal light of Santa Maria dell’Assunta shows the finest serrated acanthus carved into the white marble capitals on the taller colonnades. Ruskin thought them “the best I have ever seen, as examples of perfectly calculated effect from every touch of the chisel”. A startling Byzantine mosaic of the Last Judgment warns us to contemplate the future but address our actions now.

We save the redbrick belltower until last, clambering to a height of 60m. It’s doubtful Ruskin had any renovations to deal with. But between inconveniently placed scaffolding is the same wild sea wasteland of lurid ashen grey that greeted him, and north, the same purple snow-capped mountains. I imagine new arrivals gazing northward with every snowy sunset, heartbroken, remembering the flames devouring their homes.

Back at the ferry hut I step on the gangplank, turn and take one last, late-afternoon look.

The belltower appears desolate, caged in scaffold. A lone seagull wheels overhead on the grey air. The bow washes in time with my breathing. My tattered copy of Ruskin’s The Stones of Venice opens at page 19: “The glacier torrent and the lava stream: they met and contended over the wreck of the Roman empire; and the very centre of the struggle, the point of pause for both, the dead water of the opposite eddies, charged with embayed fragments of the Roman wreck, is VENICE.”

Disembarking at St Marks, we push past the African bag-sellers, the pickpockets and tour groups. At our heavy cast-iron gate I look back over my girlfriend’s shoulder to the far colonnades of the piazza. There, under the portico arches, I imagine Ruskin. He looks frail, not imposing at all, with a tatty grey beard, buttoned vest and oversized coat, his movements disconnected and urgent, a wild look in his eye as he bickers and haggles with himself.

After eleven visits, Ruskin knew every corner of this city and considered himself an adopted son. He first suffered mental illness in 1886, completing his autobiography and the fig-tree sketch in the same year, before following his wife into the abyss of insanity and dying of influenza in 1900.

Turning, I push open the squeaky gate into our deserted hotel courtyard. In the musty air, I run my hand over the cold dome of yet another ancient wellhead. The sounds of St Marks have evaporated and a lamp beckons beneath a white awning.

Early next morning we drink strong black coffee on our balcony above the Orseolo canal.

Gondoliers call, mist hangs above the water and we smell freshly baked pastries.

A man in a leather apron and floppy tweed cap lugs groceries from a barge below, while a black labrador sits up front.

Both draughtsmen, we are admiring a sketch of Ruskin’s: The Fig-tree Angle of the Ducal Palace from 1869, all light and shade, eastern arches and colonnades.

So… Venice is both East and West, but she is only the daughter, and it all began with another place just north of here: “Mother and daughter, you behold them both in their widowhood, TORCELLO and VENICE.” 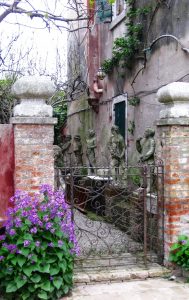