Of Music, Madness and Fame – one week in Prague (Czech Republic) 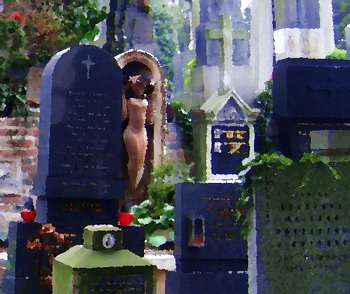 Bohdan is a busker and a bear of a man; close cropped hair, a still boyish face and an incongruous grey bush of a beard. Most days he drags his cello from near here to Charles Bridge to supplement his modest waiter’s income. The faint background music is Dvorak’s No8 and I comment on the internationally renowned Czech. Bohdan’s right eye flashes. The other – oddly askew and unfocussed – is a childhood reminder of a Soviet baton and the killings that followed the Prague Spring of 1968.

He shuffles in his seat as the passing waitress smiles. “To be honest”, he begins, “I’ve not much time for the man.” He taps the table. “Mmm…yes, I know there are some that disagree.”

I press Bohdan for details. “Well, there is no doubt Dvorak was the more…how you say…colourful?” He laughs. “Yes, yes: I know Neil Armstrong took a Dvorak symphony to the Moon! But for me, I am afraid Dvorak rode on the shoulders of Smetana.” I’m puzzled, having never heard that name. Bohdan obliges. “A quiet man, his kindness was rewarded by vicious attacks from conservatives.” I order a second red, a fine bottle of St. Laurent.

Before leaving, Bohdan signals to the waitress. “Dvorak? I shall show you the difference,” he growls. And before long there’s a change in the ambience. An opening wavelet of flute is followed by a second, then a pluck of strings. The music swells louder, until bursting into a flood of strings and melancholy. Bohdan talks of history, puffing out his ample chest. “This beautiful piece, it is from the 1870s, but Bedrich Smetana was writing when we rose against the Austrians back in 1848. So…he may not be known to the World, but with we Czechs, it is what is here at home that counts.”

The next morning I wake early to a fog within and without; Smetana’s life flowing through my scrambled head. The first city bells have already chimed and my split level pension is quiet as I throw open the bedroom French doors. Outside in the cold morning air, I gulp down a tall orange juice and munch on a piece of dark rye. Thick mist sits in the valley below – a receding river of fluffy powder snow – the monastery bells chiming from beneath onion spires on the green knoll across the way.

With a flight later today, I shuffle down slippery steps and descend the grassy valley amid ghostly black skeletons of trees laden with pregnant blossom buds. At the bottom I enter a walled gateway and emerge to a residential maze of red roofs, rough whitewashed walls, zig-zag streets and lanes. Trams rattle by. I smell pancakes and bacon as commuters and backpackers search out coffee. Across the river Vltava I follow its snaking loops to the last destination marked on my battered map.

A rocky outcrop overhangs the bank. At the top, high spires soar; the past home of ancient kings, and Vysehrad’s Basilica of Saints Peter and Paul. I’m here to see the graveyard, officially founded in 1869; although some burials are from two centuries before.

Stopping by the pantheon I enter and read from a list of names. There’s `Antonin Leopold Dvorak’; and I’m surprised to see the now familiar name of Smetana.

The cemetery surrounds are classic art-nouveau. Tall shrubs shade low brick walls among a mosaic of angels and ornate headstones that rise from waves of ivy. The graves of Czech composers commingle with writers, artists and sculptors: there’s Kubelik, Capek and Neruda. Here too, are Cech and Myslbek. At Dvorak’s grave I peer up at the composer’s bust, sitting high on a grand podium ablaze with the great man’s name in ornate gold letters of runic form.

When it’s time to go, I drop by the grave of Smetana. It’s a simple oblong of grey granite with an upright squarish spire for a headstone. There’s a plaque with a small star atop the plain printing: `B. SMETANA 1824-1884.’ There are fresh flowers; a simple yellow posy and a bunch of jonquils. I look at my watch, but pause a moment to recall Bohdan’s story.

Although Smetana was a talented child pianist from a well-off Czech family, he struggled and moved to Sweden to make a living as a teacher, choirmaster and composer. His first wife died from tuberculosis after giving birth to four children, with three of those dying in early childhood; his second wife bore him two daughters.

Smetana returned to Prague in the 1860s, immersing himself in the city’s opera scene. However – at 38yrs old – he heard voices and the sound of an organ in the everyday rumble of a train. From here he was beset with increasing tinnitus and a deterioration in his hearing. By 1875 Smetana was completely deaf, but somehow embarked on a prolonged period of productivity.

In 1882 he began to suffer imaginary visitors, a distortion of speech and loss of memory. He became more confused and distracted, writing letters to the already dead Mozart and Beethoven. Smetana then became uncharacteristically aggressive, destroying furniture and even his own work. The composer died in the Prague Mental Asylum after weeks of personal degradation and starvation.

My footsteps echo as I wend my way down to the river. I listen to the ripple of white-water and gaze at masses of creepers that hang on river walls. Raising a lukewarm coffee to my lips, bells peel out from the Basilica far above. Could it be? There’s no mistaking that melody. It’s Bohdan’s favourite: Bedrich Smetana’s romantic anthem to the Czech nation. I’m embarrassed at my previous ignorance. 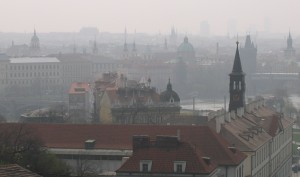