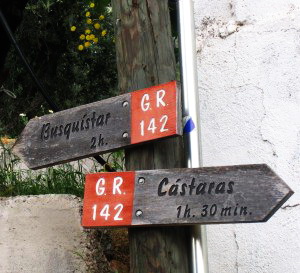 The phone rings late afternoon: my girlfriend having just arrived. We meet and trudge uphill from Granada station, through the 15th century Gate of Pomegranates to this Alhambra citadel – ruddy stone towers, roses, oranges and myrtles – a garden-fortress built to house a Moorish army of 40,000.

Boabdil was born here, imprisoned in the Tower of Comares when just newly-married; by a paranoid father who once ordered the beheading of 36 knights in the Hall of the Abencerrajes, the red stains still shouting from fountain bases and flagstone floors. Boabdil escaped from his prison on a rope of his mother’s silken scarves.

Castellated battlements throw jagged shadows, the flags of Granada, Spain and Andalusia flapping in a late spring breeze; that of the European Union a reminder of Napoleon’s retreating army mining the place before leaving, this World Heritage wonder only saved by a Spaniard cutting the fuse to a French stash of gunpowder.

Boabdil would finally depose his father in 1482, only to be captured the very next year by Castilian Catholic armies; his own son taken hostage as security and Boabdil left as caretaker only. After 6yrs’ war with his father and uncle, Boabdil was again besieged by Castilian armies, exiled to Las Alpujarras and mostly remembered for leading a small band of dejected followers to a mountain pass and bursting into tears when turning back to gaze on a distant Alhambra for one last time: his lost ‘pearl set in emeralds’.

Our aim is to follow in the footsteps of Boabdil, the last Sultan; first stop the village of Lanjaron. The  morning bus leaves Granada, reaching Lanjaron within the hour.

Another hour, and we’re by the fertile Guadalfeo River and the largest village – Orgiva – palisaded by lemon, olive and orange groves; the road finally climbing into the Sierra Nevada. At 1200m, Pampaneira has a busy village square with plastic café chairs, coloured rugs on merchants’ racks, gaggles of artisans’ stores side by side. Open channels gurgle and rush, water tumbling all the way to the River Poqueira. We buy sausage and bread, red wine and green olives.

Bubion is a mere 100m uphill; a winding gravel path between drifts of poppies: splashes of red that sprout from ancient rock piles, broken bricks and Moorish dreams. We pass orchards, poplars and vegetable plots. A crucifix hangs from a laundry wall, while cobbled paths wind under flower-filled balconies and past a 16th century church built by converted Moors. A ruined fortress sits silent.

Red and white trail markers line a narrow dirt road. We amble beneath chestnuts and holm oaks. Snow-powdered peaks hang from the relentless blue of Spanish skies. On a rubble track I stare north, along the ‘Ravine of Blood’, to another wave of a distant village: whitewashed blocks perched on a shimmering rocky saddle.

A 10min track falls to the village of Pitres, between stands of walnuts and cherries. Large homes nestle on higher wooded terraces. Chaparrals are scarlet roses, lining cobbled, tinkling channels of cold mountain water, falling to the sister hamlets of Mecina, Mecinella and Fondales; paths through an urban Moorish maze, between odd-angled walls, and finally standing on the Trevelez.

At 1200m, Ferriola emerges from the green of unruly fig thickets. A broken pomegranate tops the gateposts, the symbol of Boabdil’s Granada.

We amble on tessellated grey slate between two walls, under wooden beams and someone’s living room to sip peppermint tea in a shop doorway. A tabby cat sprawls in afternoon sun, among TV aerials, chimney toadstools and straggling rooftop wildflowers.

Past an open trough of a laundry, we find a bar and buy costa in a plastic Coke bottle; a local concoction somewhere between moselle and sherry. Tonight’s lodgings are converted stables – our Swedish hosts living above – whitewashed walls and beams, a low rickety door; winding steps down to a cave-like bedroom, bathroom and rustic sunken kitchen. In the morning I pay Sven and wonder what a Swede is doing way down here. He laughs, and answers in perfect English. “Ah yes, I see…..we are great walkers, and have been many places. ” He tweaks the end of a white pointed beard. “It is the ghosts that keep us here.”

It’s 5mins to La Gaseosa, a fizzy-sweet mineral-water fountain spouting from a blue and yellow mosaic tiles into a concrete basin. Tied twisted twigs make an artwork of a farm stock gate.

At the Busquistar turn, a shale path weaves past dishevelled stone shepherd huts and walls, across dry wild country falling again to the gurgling Trevelez. Ducking under a wooden lintel to enter Moorish ruins; the mill’s walls broken and tumbled down. We share plastic cups of the yellow-brown costa.

In the morning we leave a sleepy Notaez on a goat track across rolling hills, the ground damp, pungent thyme and rosemary crushed underfoot. From here it’s mostly uphill to Castaras, then Nieles, to a flooded crossing and cold feet: the recently swollen Guadalfeo. We arrive in the dark, wet and bedraggled to the welcoming luxury of Alqueria de Morayma. There’s almond soup, pork and lamb; us on wooden stools by crackling log fire and bar. My thoughts settle on Boabdil and his 15yr old bride; the ‘tender Morayma’.

In the morning we wake to sun on shining white walls across the valley, and complaining turkeys penned just outside. Our bus leaves the Cadiar square, by a 16th century Renaissance church. Old men in tweed jackets and ties are lost in conversation and clouds of cigarette smoke. At Ugijar, we’re almost at the end of our quest and our journey’s most eastern reach.

Boabdil was here for less than a year when Isabella – on the advice of  her Catholic confessor – banished him from Spain; his people here for another 100yrs, until they too were expelled around 1570, leaving two families of Moors per village to teach newcomers farming and water management.

I wipe sweat from my neck with a grotty bandanna, our trail leading upward along a dusty, dirt road; past endless olive rows all the way to Las Chimeneas guest house. Late afternoon we sit drinking Spanish beer and take in the perfumes of a Moroccan tajine. Smoking logs burn in a cast-iron stove; clouds journey overhead, shifting shadows on rolling hills and a distant Mediterranean.

Next morning there’s one last thing: to follow a creek through stands of pines, skirting snowdrifts to lunch on Mulhacen’s 3600m shining white cap: the burial place of Boabdil’s cruel father.

Panoramic views stretch north to Granada and south over coastal hills, the Mediterranean, and on to Morocco, the Rif Mountains and the World Heritage city of Fez; where Boabdil `The Unfortunate’ fell in 1527, fighting an obscure battle for some obscure African cause. 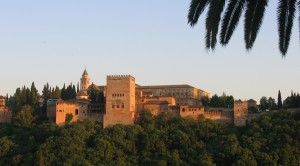