The plaintive cry of a lone peacock fractures the silence. Croaking egrets chorus from clumps of reeds at the foot of these stone walls and ramparts. There are snorts and bellows from buffalo. Two calves splash about, the mother’s wet horns and back steaming above broken reflections that come and go between drifts of morning mist.

I stand on the edge of a translucent marble plateau; the Taj Mahal. My friend smokes one cigarette after another. This is the calm, he says, “before the throngs of tourists that will come, as surely as the monsoon.” I lower one hand over the edge and run my fingers along the carved railing. The sky is flat and dull, the railing cool.

At our backs are the marble minarets of the most visited place in India – the eighth wonder of the world – built by a broken-hearted visionary for a loving wife who died during the birth of their fourteenth child. And yet Ishmael and I choose to ponder the ways of a river all smoke and mirrors; a timeless highway meandering through the valley.

Ishmael is an accountant – university trained – and working in the ticket office. He’s dark, with bloodshot, wandering eyes and a ragged lop-sided moustache; his hands nervous and nicotine-stained. He has a smoker’s raspy cough and the brooding air of a worn-out man. The dank odour of river mudflats and the fragrance of orange blossom mix with the smell of his Capstan cigarettes.

To get here we’ve ambled along paths, through ornamental gardens and ponds in the pre-dawn cool. I’ve followed behind without a word as Ishmael completes his daily routine, to the rhythmic sound of his own scuffing sandals and the clipping and sweeping of an army of groundsmen.

“Once upon a time there was a little girl,” he begins. “Her name is Aastha. She is feisty, bright and beautiful, with the thickest straight hair, like her mother. And her eyes, they shine.  When she laughs, even the thrush stops its melodious whistle. It is a proud bird, the thrush, and is not liking to be outdone.”

“One day the girl, she is poorly. Over many weeks she is not better. And now there are tantrums, then silence. This little girl is aged 12.” Ishmael coughs. “The parents, they take the girl to the doctors in New Delhi. There are questions, prodding and poking.”

“Finally there is coming an answer; but the parents, they are frightened.” Ishmael stops and looks down at his hands as if they belong to someone else. “If only there is a magic carpet to take them away to start a new life.” Ishmael’s eyes lift for a moment. “But of course, there is not such a thing. Is this a curse for something they have or have not done?”

Ishmael lights up yet another cigarette, blows out a streak of smoke and continues. “There is chemotherapy and the many tests. The money comes; everyone, they are helping. One day the results will surely be better.”

Ishmael turns to face me. “There are books and many learned people here,” he says. “This is the new India, the motherland of opportunity.” But there’s a hollow ring to Ishmael’s words and his voice fades away. “But, can it be the new ways are not always the best? The mother, she pleads to do the needful; to consult the mullahs, the priests and holy men.” Ishmael turns, gazing across to the mosque. “Here, we have the prayers of many faiths; in the temples, fire temples and gurdwaras. We have churches, idgahs and synagogues. But still, where is the answer?” Ishmael takes a resigned breath. “There is a loving grandmother, and many aunts. There are silent and tearful hugs for a little girl with no hair. “But the painful tests, they are continuing. Needles puncture skin and bone. Precious marrow is sucked from her tiny pelvis. But this girl, she is so very brave.”

Ishmael’s stare returns to the river and my thoughts are disrupted by a sound; the gleeful chuckle of a small girl. A family are the first tourists, the girl dressed in a yellow tee, orange towelling sunhat and bright red beach pants. She draws imaginary pictures with her foot; the marble tiles polished by a million feet before her.

Ishmael draws in a deep breath. “Month after month, they go by. Finally it is all too much, even for the bravest of little girls. There is crying when she thinks her foolish father cannot hear. Aastha hides in the corner of her room chewing at the sleeve of her favourite dress. She is tired.”

Ishmael shrugs his shoulders and sighs. “But her father, he is always knowing the best; a selfish man, he cannot let things be. To lose his Aastha is more than he can bear.”

He turns towards me and I read the lines weathered in his whiskered face; there’s an empty greyness in his eyes to match an empty sky. “A house without children is a graveyard,” he finally says. Today would have been his daughter’s sixteenth birthday.

Suddenly we’re surrounded by hundreds of tourists. Ishmael’s working day has begun. We say our goodbyes, and I watch as he descends the stairs. He continues past fruit trees and the cypress rows of classic Persian design – trees of life and death – until he is lost in the crowd.

That night I journey to Delhi, climbing aboard the eight-thirty superfast train – the Shatabdi Express – to mix with `bank managers and army officers’ according to the railway brochure. But I’m not good company, picking at a cucumber sandwich and swigging from a bottle of Kingfisher beer.

Fields flash past. But the twilight is ebbing as I stare at a landscape easing into night, until there’s only the faded reflection of a little girl’s laughing face.  Yes, her eyes are shining jewels, and around her neck is the scalloped lace collar of a floral dress. Her Indian name means `faith.’ 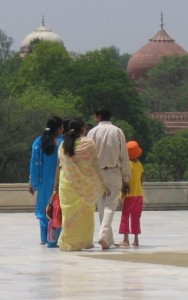