Looking for a Life – the fruits of our labour (Lagos, Nigeria) 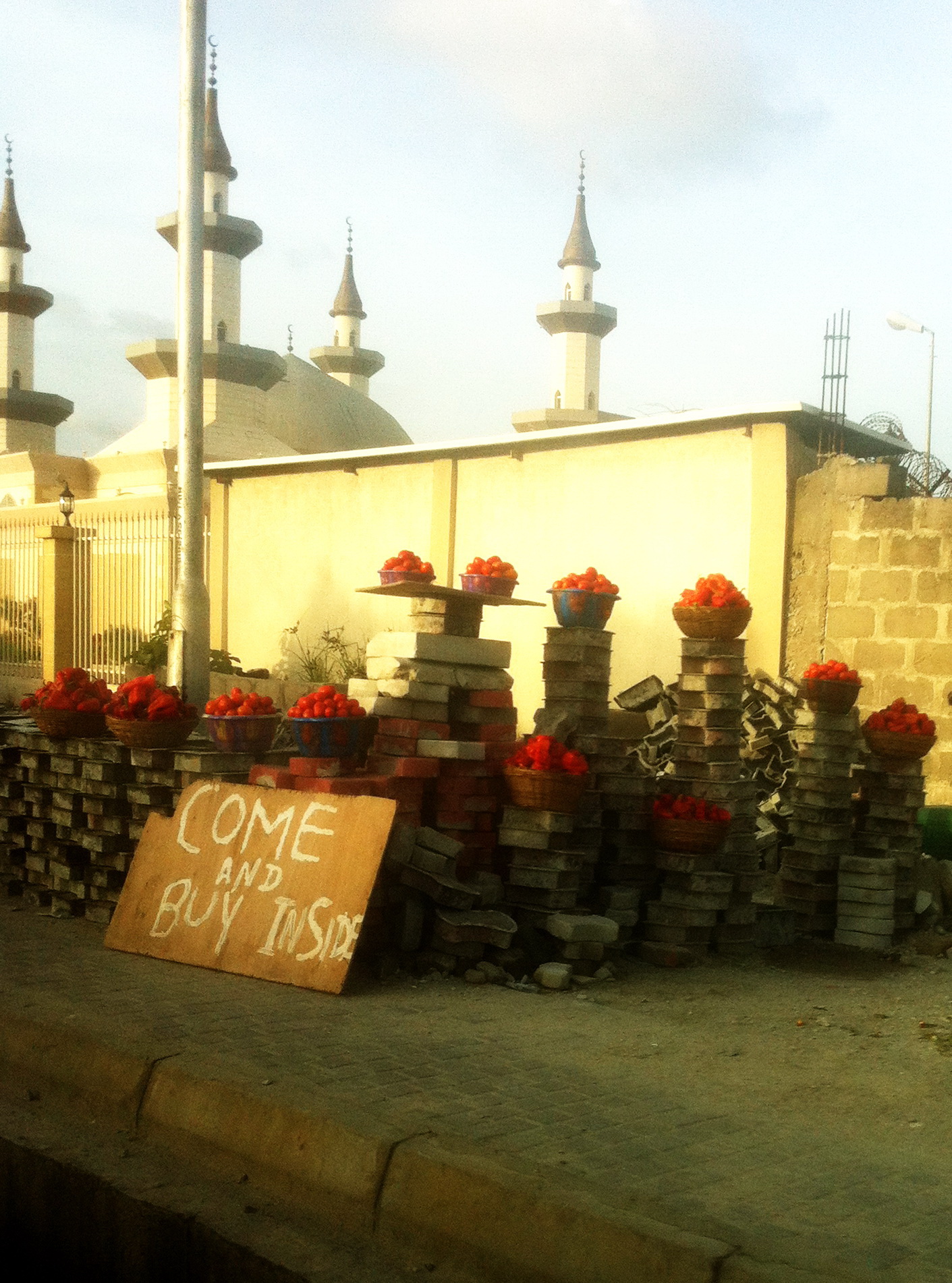 Mosque minarets pierce soggy Lagos skies and I ask my driver to stop, the road potholed with waterlogged lakes and lined both sides with traders’ stalls. Just here are piles of tomatoes on tottering stacks of pavers. Ribs sizzle next door, sweet basil wafting from the meaty pile frying over open flames.

Rasheed’s seat is a round rusted drum, his skullcap like his teeth – a dazzling white. In the middle of his forehead, the tell-tale callous from years of prostrating 3-times daily, his head touching the ground God-knows how many times. He looks right through me, his eyes cloudy, white swathed arm outstretched in my direction.

“You will buy something Boss,” he says, and smiles “… inshallah.” The tomatoes hail from somewhere “up north”… like his family. His wares are shining egg-like orbs. They are bright red these tomatoes, meticulously and proudly set in assorted round bowls in seemingly impossible pyramids.

Rasheed’s brother was the first to arrive years ago, convincing his mother to follow with Rasheed, from a family of twelve. His father had died “many years passed”. The others stayed and Rasheed shakes his head. “Don’t know what happened Boss.” He falls silent, shuffling selected tomatoes from one precarious pile across to another.

There’s a noise from the road – the rush of rumble of an engine, and a splash – and we both turn. A woman stands straight and tall, balances a wide dish on her head like a black Carmen Miranda. She waves her arms and yells at the top of her voice, the square loaves of bread on her head still.

I watch as she turns her head from left to right, steps out and floats across the road through a calf-deep pond, oblivious of any hidden holes, rocks and broken pavement, her feet feeling the way.

From the mosque it’s a half hour drive back to my apartment, passing family stalls and lean-too shops selling this and that. A makeshift newspaper stand is laden with papers and the occasional magazine, all spread on a crooked trestle. Headlines hang from bulldog clips on a rope strung between wooden legs: an Imam killed up north, more kidnappings, and 30-students all shot as they slept in their school dormitory.

I peer out my apartment window, over an ancient generator that rattles more than hums. A roving street butcher has burned off the fur from a once brown goat, the flash of knife and machete with the ritual of cleaning and hacking now begun. Neighbors have left baskets to claim their share and a black pall of smoke rises to meld with these grey-laden skies.

It’s another week when I next see Rasheed, him finished for the day, standing and adjusting his pure white robes. There’s a young girl too. They talk and I watch as they leave together, Rasheed with one hand on her shoulder, a stick in his other hand. The girl is of smallish frame, maybe 12-years old, with bright eyes and a pitch-black face that beams out from under her pink hijab. She leads, steps lightly, the pair now moving as one, the girl attentive, looking about them, then up and down.

As we drive past I turn in the seat, the pair negotiating the opposite side of the road, Rasheed’s stare fixed straight ahead as they fall again into common stride. Rasheed’s stick is held tight, prodding ahead with a splash as it hits the flooded pavement. The girl stops again, another drain across their path. Something is said and they set off once more, pick up the pace and glide as one. With the sinking sun I wonder how long it will be for Rasheed to reach `home’. 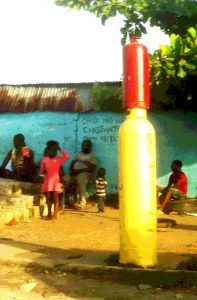