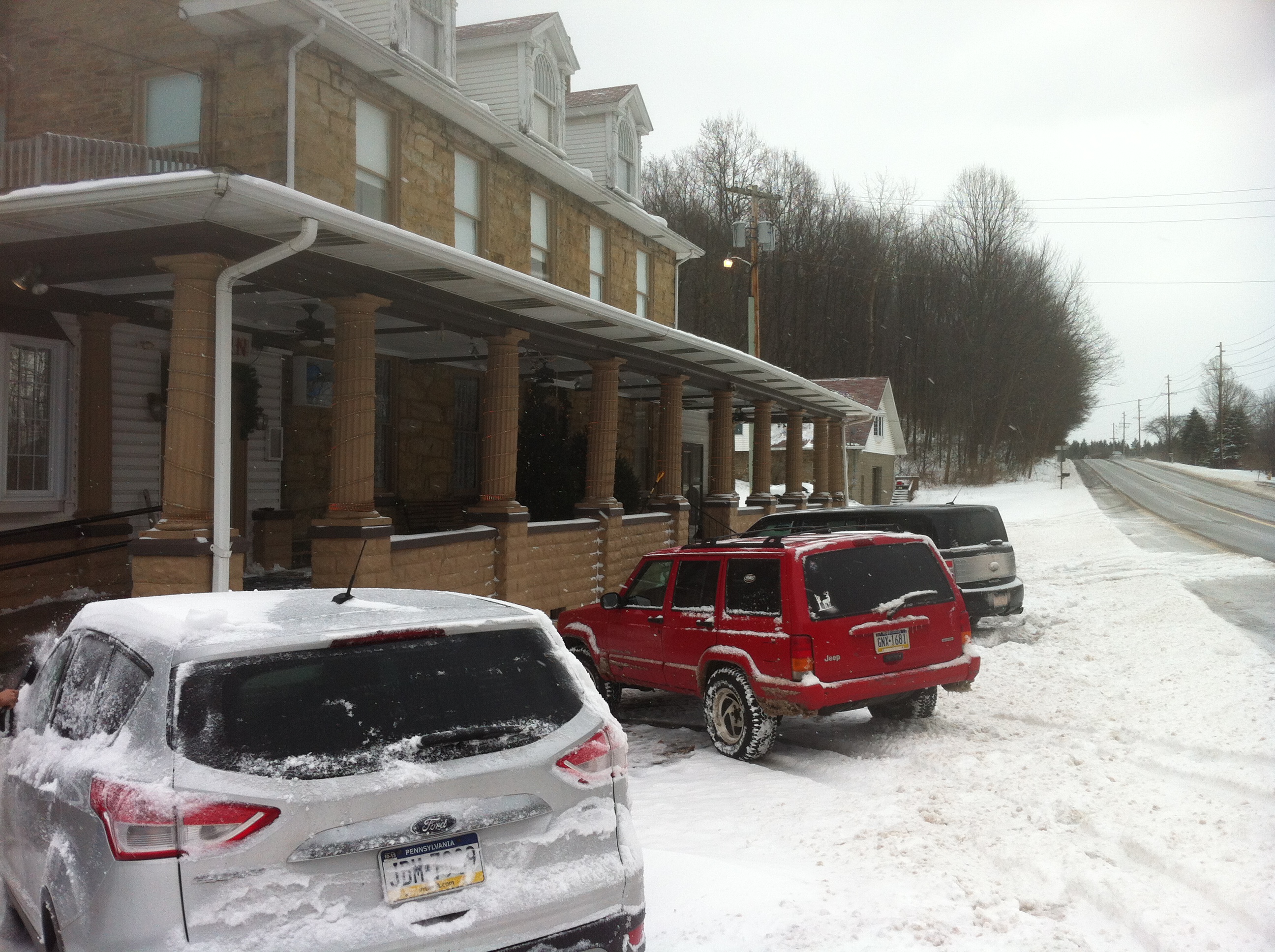 We fly from Melbourne to New York, continuing on to Pittsburgh. We’re in this part of the country to see the `best example of American architecture’, the iconic creation of Frank Lloyd Wright. The hire car attendant is astounded anyone would travel this far, handing over the keys to our 4×4; my girlfriend hoping for snow. We head for our overnight stop at the old Fayette Springs Hotel.

On our arrival we’re greeted with a surprise; this place no country diner. Andrew Stewart had high aspirations; a local land baron, an ambitious and driven man with a serious longing to succeed. He set the bar high in everything he did, building this grand retreat in 1822.

In the tavern – over mandatory Dirty Martinis – I ask a local if he knows the identity of the resident ghost. He shakes his head. “Nope. Sorry.” He looks up and down the bar. “There’re stories of course. By the way, which room you got? Ah huh! The one on the right?” He frowns, nods his head slowly up and down and tugs at his cap peak. “Mmm, yep, that’s the one alright.”

From a shared dinner of mussels `Black and Blue’, with a terracotta bottle of Cherokee wine, we climb winding stairs to our attic room. Timber steps and balustrades creak, crooked floors are covered in thick red carpet.

In the darkness small windows rattle and rafters shake with the approach of a northern storm. What dastardly act led to our restless spirit being relegated to some parallel world? I’m thinking some tragic longing, a drowning, a suicide or triple murder; the dull clanking of rusted chains, a tear-stained wretched face with hollow eyes. The door rattles.

In the morning we stand on Stewart’s raised porch by palatial carved columns, in the lee of his beloved Laurel Highlands; these columns reminders of the success of Ancient Greece or Rome, and the aspirations of Mr Stewart. I doubt Lloyd Wright would have approved, but from here Stewart surveyed all he owned.

I rub my hands and stamp my feet; my girlfriend wide-eyed at the rolling mountains swathed in white. A rusty pick-up passes, with bumper-mounted plough, pushing snow off to one side. Another slides through the carpark in a sweeping turn.

I tread gingerly across the icy patio, down to a pile of white; our parked car. My boots sink in squeaky powder snow. The engine turns and I slam the door, shovelling snow from the roof and sides; my girlfriend’s son scraping ice from the windows. I grab deep cold breaths and exchange glances with my girlfriend. At home it’s 37degC, with sun lotion and swimming the order of the day.

Climbing into the Laurel Highlands, I’m thinking of Congressman Stewart, who at his final reckoning must have been intensely disappointed. For after going to the trouble of handing out masses of free watermelons to voters, the wrong name was mistakenly recorded for the position of Vice President of the USA – Stewart being the pre-agreed preference – thereby thwarting any chance he had of becoming President.