In the Beginning – a slow boat to Africa 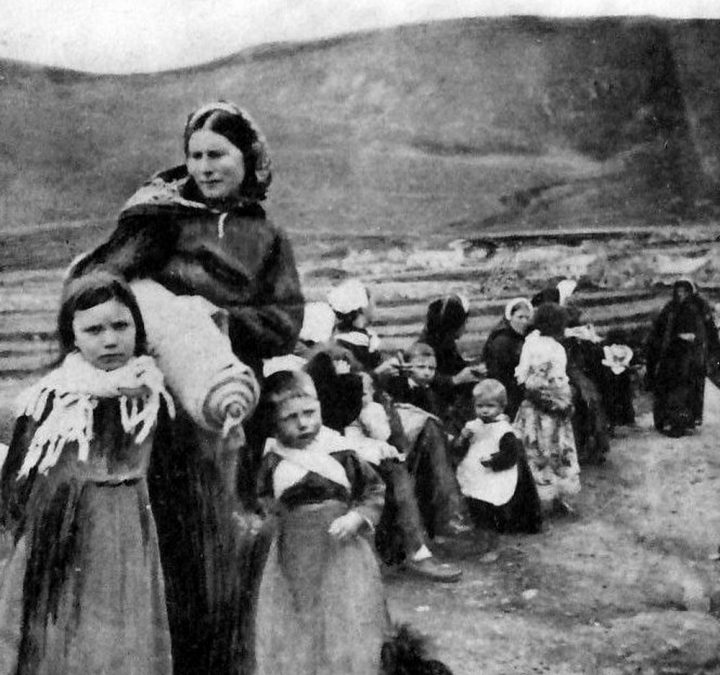 Grandma was a short, stooped lady fond of telling stories in her Scottish brogue. In that blue, white and green MacDonald tartan pinny over a floral dress, she cooked up batches of potato scones, fried fruitcake and black pudding.

No one in her family had seen a tree until arriving at the grey wharves, cobbled alleys and dilapidated sandstone tenements of Glasgow in 1930. They’d journeyed from a distant Atlantic rock – Britain’s most remote inhabited island and part of the St Kilda group, the farthest-flung archipelago of the Outer Hebrides. The entire population abandoned the islands due to sickness and impossible isolation in the frequently terrible weather.

Grandma had a story for any occasion. I saw the family gathered around the smoking hearth of a wee stone house buffeted by screaming St Kilda gales. I saw her clambering – held by tied and knotted safety ropes among soaring stony stacks, edging along vertical cliffs above seething white seas – collecting eggs and young birds from the thousands of nesting gannets, fulmars and puffins. I saw her, a wide-eyed young woman in a Glasgow with chronic unemployment, living near Sauchiehall Street and teasing Gospel Band trumpeters by standing at the front of the crowd and sucking on a cut lemon.

Grandma’s flame – Andrew, ‘a stoater of a lad’ – ran away to Rhodesia after he ‘lost his rag’ in a fight over football and a Catholic man was killed. Her family left for the Yukon, Canada, New Zealand and Australia. Letters travelled the breadth of the Pacific and the Tasman by ship, with updates on a fragmented family. Ellen’s redheaded twins arrived; Angus had a mining accident and his arm was crushed; Steamin’ Jimmy’s drink problems worsened.

Some say our most formative years are before the age of seven. I spent much of my early life with my grandmother.

I see myself in 1961. A ten-year-old boy, sitting in the front room awaiting the squeak of the postman’s bicycle brakes and the blowing of his whistle.

The boy runs outside, almost falls down the broken step. The postman has no time to blow his whistle. He hands a parcel to the beaming boy, who rips and pulls apart the paper. A stack of Eagle comics is filled with vividly coloured pictures of Dan Dare doing battle with interplanetary villains, and ‘Heros’ – a Roman soldier, born in Sparta – stationed in a mist-laden ancient Britain fraught with the dangers of druids, monsters and sorcery.

The comics are from a spinster friend of Grandma’s, still living in Glasgow. She has no children of her own and religiously saves her pennies to send the latest issues to the boy. He carefully cuts away the postage stamps and sits them between the covers of an exercise book. He writes weekly letters to his ‘Aunt Nessie’, thanking her and telling her of school, street cricket, a trip to the beach and the Melbourne zoo.

The boy begins to read voraciously. Advertisements in magazines show haphazard collections of stamps from exotic places, and plastic packets appear in the mail: brown African stamps portray a bearded man with a feather in his hair, from an exotic mountain kingdom called Lesotho; a series celebrates teams of Chinese climbers shuffling up snowy peaks beneath an icy blue roof; the towers and dome of the Taj Mahal emerge from the orb of a bright orange sunset; strange birds peer out from a page of Paraguay stamps, a toucan sporting a large clumsy-looking beak and a yellow belly, and a blue parrot prancing on oversized feet.

When the boy is sixteen there’s a dog-eared map of Africa by the bed, and books of stamps from all corners of the globe strewn about a timber floor littered with clothes that haven’t quite made it to the laundry basket. A green schoolbag with a broken zipper is laden with library books.

He drops by twice a week to see his grandma for a meal before heading off to night school. Aunt Nessie is long gone. Grandma’s health is failing too, and one night she grabs his jacket with an iron grip and insists he bend down so she can see his face.

Her eyes are cloudy, but her voice is strong. ‘Ye must see t’ world before ye marry.’ The old lady releases her grip to wave a bony finger. ‘And when ye get to Glasga and some Ned asks whi’ football team ye support, ne’er say!’

The grandmother dies. The young man smiles when he sees her death certificate; her middle name is ‘Lemon’.

I was finally leaving for exotic shores – the dark continent of Africa, and my first real adventure – yet I’d already travelled the world many times over.

Lesotho – Kingdom in the Sky