Four metre waves batter our ferry on the fiercest piece of water in the world. We’re 100km west of the Norwegian mainland and this is the Maelstrom, first mentioned by the Greeks 3000 years ago and immortalised in the iconic writings of Edgar Allen Poe and Jules Verne.

But it’s the artist and poet Theodor Severin Kittelsen who’s the icon here, his sketches of trolls and wildlife legendary; and I wonder what could drive a man said to be lyrical, macabre, anthropomorphic, soulful and poetic. Only one day earlier a Lofoten blacksmith suggested “personal demons”.

“You’ve heard of him?” Marius seemed surprised. “With not so much printed in the English language, I am thinking he does not receive the international attention.” Marius is thinking out loud, peering intently at a newly formed cormorant glowing red between smithy’s calipers. “This man, he could capture the mind and the moods… the conditions of Norwegian society and nature.”

I’m reminded of a sketch lying flat in the grey pressed-metal cabinet of an Oslo museum: an ancient crone with bent back shuffling from house to house. This is Kittelsen’s The Black Death. She journeys a winding fjordside path, by cliff and rock; a black, hooded cloak hiding all but those wide eyes, cold and grey. In one hand she carries an upright rake that some may escape, but her broom will catch all.

Kittelsen is born in southern Norway, 1857; 11yo when his father dies, leaving him to work as an errand-boy.

His artistic gift recognised at 17, he studies in Oslo and later Munich, helped by a generous benefactor. That support ends in 1879, Kittelsen leaving to eke out a living as a draughtsman for German magazines and newspapers. In 1882 he’s granted a Paris scholarship, but seems lost and longing for the simple life. “It is becoming clearer, and clearer to me what I have to do,” he writes, “and I have had more ideas – but I must, I must get home.” He returns to Norway in 1887.

The following two years find Kittelsen in Lofoten, with his sister and brother-in-law south of here at Skomvær Lighthouse. He discovers nature, his greatest comfort, adding text to his emotive collection of drawings.

Our ferry rolls as we pass the coastal ghost town of Hell – somewhere outside – Autumnal clouds heavy with rain,billowing seas grey, buckets of white crash against a ferry window barely a metre from my girlfriend’s shoulder. The bow rises and drops. There’s a shuddering thump and I worry how the cars below will cope, consoling myself with the Norwegians being old hands on perilous seas.

From Sørland wharf, we drive north to a group of buildings dwarfed by the towering 450m Nordlandsnupen backdrop; this place the original hub of Værøy, the one-time Lutheran vicarage, now a glorious guesthouse.

“Kittelsen?” Hege asks with raised eyebrows. “Yah, but of course. He was here!” She points to the building opposite our own refurbished-chicken-house lodgings, and hunts down a bulky volume from cluttered shelves of books and an odd mix of  island birds; some taxidermist’s discarded  pride and joy.

Hege returns with the blue bound, gold-embossed gem, Fra Lofoten, Kittelsen’s signature bold and sweeping. “A confident man?” asks Hege, “I am not so sure.” She nods her head and again raises her eyebrows. “He was an artist, after all.”

That night the wind howls and rattles windows: the same wind Kittelsen knew when sketching and writing here, confiding in the Lutheran priest and compiling Fra Lofoten; leading the acclaimed Norwegian artist Christian Krohg to surmise, “Lofoten is what suddenly has made Kittelsen into the poet and great artist that he is… his vision is universal, unpretentious and explicit.”

In the morning I linger outside Kittelsen’s room next door to ours, soaking up Arctic sun in the lee of those charcoal-shadowed cliffs. Værøy crows whirr, and croaks rise from secret stone ledges; others catching cold updrafts to disappear from view.

The next day we’re on the island of Røstlandlet – ‘Røst’ to locals – the pitter-patter of soft rain on an open awning window. At breakfast the morning outside is grey and as flat as Røst, ‘flat as a pancake’ on tourist brochures, with 640 human inhabitants surrounded by 300 islets and 2.5 million nesting birds on season.

Finn has lived here all his life, takes tourists out to the bird islands, in what was once the island doctor’s boat. He peers up at a featureless sky. “Mmmm, maybe not today,” he says as he sniffs the air, “it will be better.” Intended to put our minds at ease, Finn tells the story of the local church destroyed in an 1835 hurricane; the spire and attached bells blown clear off and dumped on the ground. He’ll take us tomorrow, weather permitting, to Kittelsen’s Skomvær.

Finally there’sSkomvær Island, the last stop till Iceland; not as flat as Røst, the 1887 lighthouse sitting on low green pastures, behind us the sculptured stacks of Kittelsen’s bird islands.

Returning to the mainland in 1889, Kittelsen marries; a self-portrait has him bearded, head turned slightly, pale eyes pensive with an intense inner glow that follows me around the room. The brow is slightly furrowed, the hair short and brownish-fair under an artist’s deep hessian skullcap; the dark, crumpled, jacket open to reveal a linen shirt and collar.

Life was difficult for Kittelsen, his wife and nine children. As time passed the artist’s health failed, the family forced to sell the home and leave for Oslo in 1910.

Kittelsen died at age 57, his friend Christian Skredsvig lamenting “…there will never be anyone to succeed him. Even the trolls have disappeared for always. At any rate, I have never seen them since.”

The mainland ferry approaches, the Arctic wind loaded with the smell of salt and wooden racks of salted cod. I dally by the terminal, peering through jetty cracks to the heaving black below, before gazing out to sea. Three silent cormorants sit on a nearby skerry, wet wings extended out to dry, long snakelike necks and hooked beaks held high. These must surely be THE three cormorants of Røst, an ancient tale of bird brothers in a magical land south of Skomvær, and sketched by Kittelsen; a land where drowned sailors live forever, visiting their families in the form of cormorants. 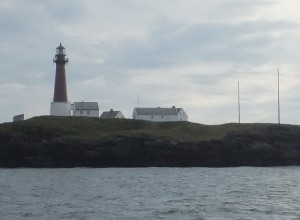