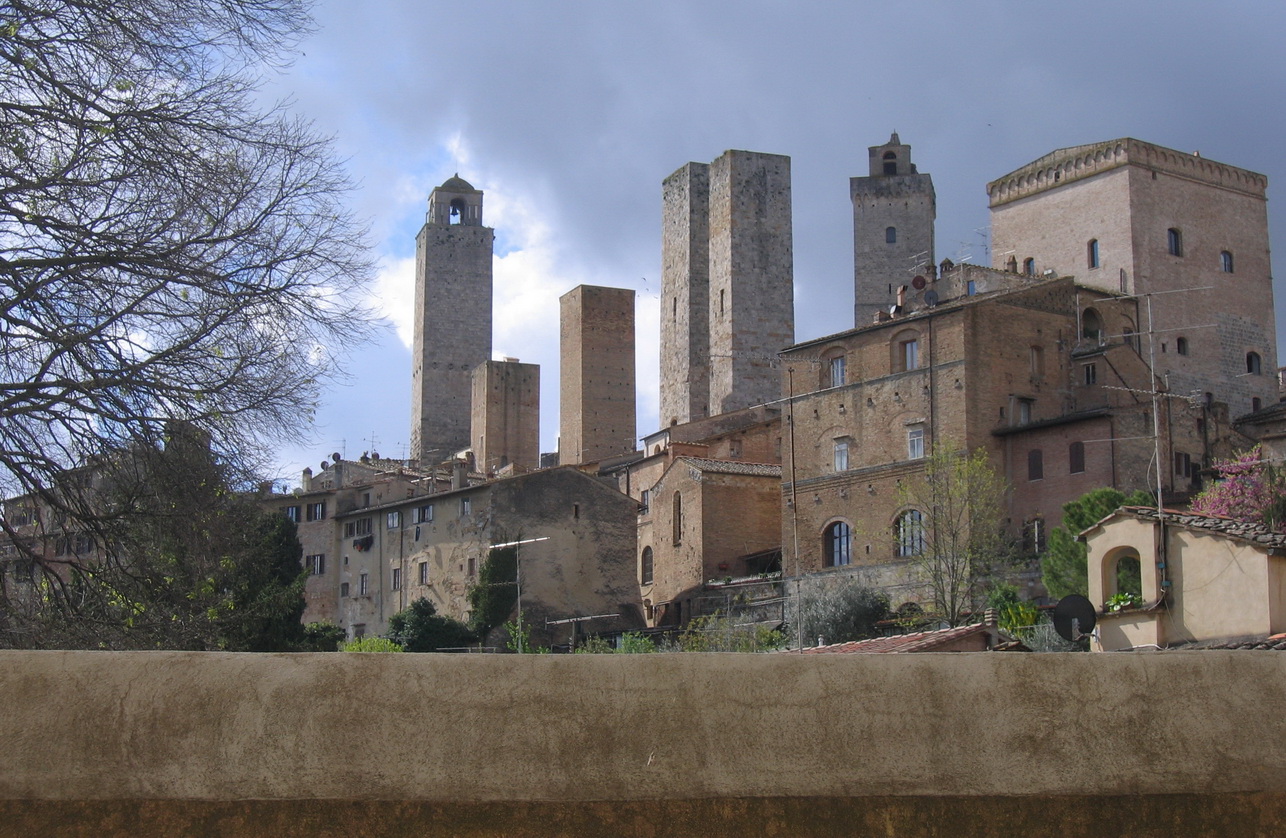 Dragano is an editor initially from up north. He’s tall and rakish, the wisp of a moustache and sleek brown hair; has the habit of whistling unexpectedly, as he ponders the ways of an unjust world while stroking a precocious black cat. His villa is classic Tuscan, the bricks and terra cotta gables more orange than red. I soak up the sun while a younger woman serves coffee and biscotti, rubs Dragano’s shoulder and returns to the kitchen.

I mention Venice: Dragano’s birthplace and from where I’ve come. “Ah yes, but that was not to be.” He smiles wistfully and his eyes drift off to one side. “It is of course, a woman that brings me here.” There’s a shake of his head and he seems happy to change the subject. “So,” he fixes me in his gaze, “you are on your way to San Gimignano? It is but one hour from here, and they have the best artisans.”

Dragano squints in the sunlight and leans forward in his chair. “My son is such a craftsman.” He stares at the paving at his feet, and the sound of schoolkids drifts in from the street. “It is from his mother he gets this gift. In early days she is wild and free; these days a teacher of art.” His eyes meet mine and there’s a fleeting smile. An odd silence permeates the courtyard until a low melodic whistle escapes from his lips. I note his son’s name and enter it in my phone.

Next morning I park in the shadow of 13th century walls, entering the town via the Porta San Giovanni, lingering awhile in the town square by the bell tower; this bell one of many that rang of their own accord in 1253 upon the death of the town’s paralysed patron saint.

Crooked cobbled steps climb ancient laneways to the highest knoll where I sit in a balmy breeze. A brick and stone arbour is part gnarled wisteria; sprouts of mauve framing a Tuscan montage of rolling hills beyond. I turn and stare across merchant house-towers that soar to a height of 50m and once numbered 72, built by jealous feudal families craving wealth and influence.

I breathe in the scent of warm rock and earth, brushing frazzled tufts of summer grass from jeans and boots. I pick up my pack and check my phone.

On a meandering staircase I stop to ask and confirm the name. “Si Signor, the bellmaker? But of course… but that is not the family name.” I’m directed to take another turn and yet another set of stairs further down the hill, to a rustic Tuscan shopfront; the head of the window a low Roman arch. I stand outside, peering through glass ancient and unclear.

The door is heavy, the handle a dull brass ring. I twist and push the door ajar. There’s the sound of someone whistling from somewhere within. The single room is all clutter, the now silent occupant still unseen. I push past a bench and register, entering a Lewis Carroll wonderland.

A chorus of tinkling bells ring in the breeze, the draft from the street having followed me in. The door swings shut with a bang, and I jump. A mosaic lamp flares into life, throwing mirror-ball beams about the scene: this maze of fairy bells that swing higgledy piggledy in their web of gossamer threads and tiny shards of Venetian glass. More bells hang from timber-boarded, odd angled-ceilings and crooked metal brackets perched on walls of weathered brick, each adorned with delicate hues; sprays of flowers and cats in tuxedos. There’s a 60s ambience of Nag Champa incense and wet clay.

I’m startled by a voice from a back corner. “Si, the cats; they are my favourites. You will be taking something?”

He sits on a stool, behind potters’ wheel and work bench; piles of pieces midway between paintbrush and wheel. The voice is husky, his father’s brown hair parted at the side; the same tilt of his head and sharp nose. But the voice has an awkward disconnect; each word fighting to finish a sentence; and yet… he can hold a tune.

There’s a shuffle and now he’s half standing. He’s shorter than his father, or slightly bent. His movement is awkward when he turns to follow my finger pointing across the room, but there are so many to choose from. I finally decide on a single bell hanging against the wall. He shuffles towards me, laughing wildly at my indecision until he gasps for air.  “This is the one?” he finally blurts out.

He’s somehow thrown himself past me, long rod in hand, lunging and leaning with awkward gait. I’m even more uncomfortable now, seeing the extent of his physical difficulty and making things worse by offering help. His body twists, his face a picture of concentration; his tongue poking from the corner of his mouth and eyes screwed up. “No, no…this, is something I must do.” He extends the rod into the clutter and I hold my breath, fearing he’ll bring the whole lot down about our ears.

Dragging his right arm by his side, his right foot too seems a burden; and yet he deftly turns the rod side-on, catching the bell’s delicate hanging thread and releasing it from its wall-mounted bracket. There’s a burst of laughter when he spies me frozen as I stare; him wielding a shepherds’ crook to capture his tiny pottery bells daubed with feline friends, in splashes of black; the flowers of lemon and fairy blue.

He props on a stool behind the register, and I ask him how he put all this together. “Oh, my mother, she helps me.” He battles on wrapping my bell in green crepe paper. “I owe her much,” he says. “She raises me alone.” I fidget with my pack and look away.

“No, I do not remember my father,” he continues, his head jerking to one side. “He died when I was so young.” I’m puzzled, but say nothing. He’s sharp this young man, and I feel his eyes sizing me up. “Things are hard for her I think…with me of course.” He falls quiet, the grey eyes lowered, his tongue again in the corner of his mouth as he battles the wrapping paper.

A month later I unexpectedly find myself back in Florence. “You are back so soon my friend?” Dragano asks, and we sit once more in the same courtyard exchanging idle chatter on literature, politics and the likelihood of me receiving a Florence traffic infringement notice when eventually returning home to Melbourne.

I’m fumbling with a small painted bell in my jacket pocket, Dragano’s stare intense. “Ah, so you met?” he inquires with apparent surprise. I answer yes, but that his son was difficult to find. I show my friend the bell, turn it between my fingers and place it back in the green crepe wrapping.

Dragano’s eyes narrow and he hesitates. “And you spoke?”  I reply that the shop was busy, and there was little chance. My friend’s eyes soften and wander across to the dark-haired young woman busying herself with dinner at the kitchen window.

I’m thinking of a young Italian couple; the ecstatic announcement of a new pregnancy, the arrival of a beautiful new baby boy, and the concern of a doctor for a toddler that walks with a slight sway and seems to favour one side over the other. I see the years that follow, the dwindling time the young couple have for each other; the unravelling of lives, the widening gap and the tortured priorities of two people struggling with blame and the allocation of affection. 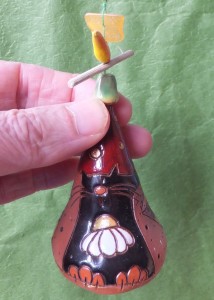