`…didn’t you ever want to know what was on the other side of the mountain?’

Funny to find an Antipodean neighbour way out here: a beanie-clad, mumbling, red-head New Zealander in the middle of Africa; him having asked about places I’ve been, then admonishing himself for being “too nosey”.

After only one day, I’ve realised Keven talks to himself – constantly – the oddball Kiwi banter more rhetorical observation than prying.

From Johannesburg, it’s a 200km drive south, meeting `Kiwi Kev’ and sharing a room, him with no money, having donated a wallet and sandwich to a marauding baboon; the toothy beast snatching both from the front seat of his van. He hadn’t seen the warning signs: ‘You feed em, we shoot em.’

From our overnight digs, I’ve cajoled my city hire car along potholed mountain roads; Keven’s hand-painted van “no good on them hills.” At the carpark we’ve signed a hiker’s registration book.

From there it’s 1-1/2hrs scrambling over more scoria to get here, on a narrow wandering track cut from the side of stoney parapets, all cliff and ragged tumbled rock; my lunchtime goal to sit atop a 3000m high, 5km long, sheer basalt cliff face called ‘The Amphitheatre’.

We head off once more, another 1/2hr to a giant crevasse, a vertical, seemingly insurmountable stone overhang and a pair of rusted chain ladders hanging, hopefully well-anchored somewhere 50m above. Kev gives the first chain a good tug, muttering something about his lack of travel insurance. Atop the second flight I turn around and feel dizzy at the daunting spectacle, and the thought of our return.

It’s another hour’s tramp across an alpine plateau, once a Dinosaur playground, now vacant and exposed. Finally we stop, Kev taken with green valley views 1000m below, and me with the steep walls of wild rocky ramparts across the way: the once isolated mountain kingdom of Lesotho.

The silence is broken by the chirrup cry of a soaring Black eagle. “Wicked”, says Kev, scratching stubbled chin and sprouting whimsical comparisons with the Himalayan magic of Mustang, Bhutan and Tibet. Dragging his eyes from the roundabout wonderland, there’s a smirk on that freckled face as he shakes his head and repeats his earlier question; this time definitely meant for me.

The air’s cold, the breeze fresh with an increasing chill. There’s the zip and rustle of plastic as Kev battles the wrapping on a packet of digestive biscuits. White water run-off gurgles and rushes, hurtling downwards from our stony pews.

I ponder Kev’s question, me lost in Lesotho: those distant battlements seeming impossibly unreachable. Suddenly I feel Kev’s stare. But I keep no tally of peaks or places, these days preoccupied with a lack of time and where I’ve never been. Kev says nothing at first, nods, shades his eyes and lifts his gaze to follow my own across the way. He looks back at me and squints. It’s “Wicked”, once again.

I’m immersed in a great pondering silence, travelling back to younger days: an often-distant kid in short pants, a faded Lesotho postage stamp – the head of a black man with a feather in his hair – and a dog-eared African map: dreams of a newly independent mountain kingdom. From the kitchen next door I hear the clink of brown beer bottles on a green-flecked Laminex table. There’s the smell of cigarettes and hot popcorn, the gruff banter of a larger-than-life uncle I sometimes heard but rarely saw; and late night tales of a dark and distant continent.

Those dreams drift on the wings of my eagle, my second visit to Southern Africa almost over and having already booked a flight to Lesotho from Jo’burg: that bastion pocket of a country – once the last safe haven in an imploding world – the dream of a visionary village chief who sees the writing on the wall in the early 19th century, leading his harassed people from marauding Zulu armies and encroaching white farmers.

I drag my eyes away, then up to a gathering bank of black cloud. Kev hoists his pack and waves towards the plateau. A rushed march and we reach the ladders; the nimbler Kev dropping over the edge and out of sight. The anchor rods shake, rusted steel scrapes on bare rock and I wait till it stops. I smell burning wood, beans and gravy. There’s chatter floating up from far below, the strains of that hybrid Kiwi lilt.

I take a deep breath and am finally on the ladder myself, then a tiny ledge, and the second ladder where I hang mid-air and halfway.

Back in Johannesburg, I’m waiting for final word on tomorrow’s flight; electrical storms and wild winds lash Lesotho and The Drakensberg. It seems I’ve again missed my chance, the flight cancelled.

I wonder if some things are just meant to be: like the chance connection of an errant baboon and a quirky Kiwi called ‘Keven’; or a government decree banning climbers from sacred mountains in far-off Bhutan, or even the dashed hopes of an ageing dreamer seeking some Shangri-La. 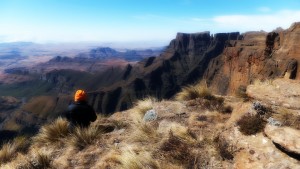